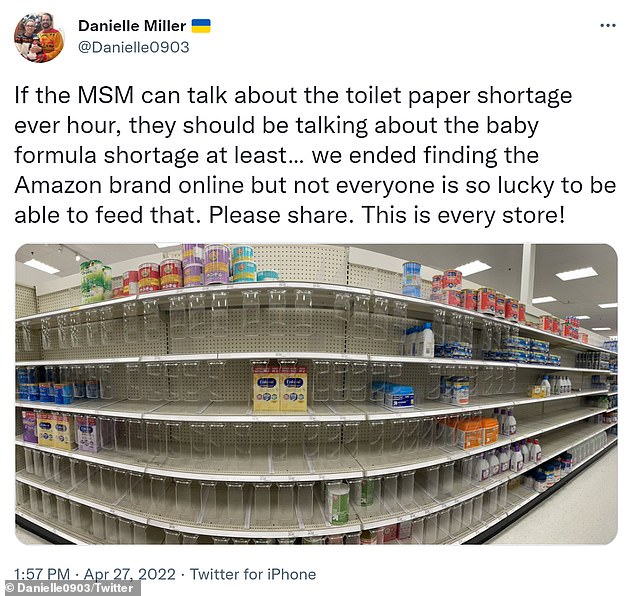 A pediatrician has warned parents not to feed their babies with homemade formula as the US experiences a staggering shortage of the product following a national recall.

Writing to Fox News Digital on Friday, Sarah Adams, a pediatrician at Akron Children’s Hospital in Ohio, warned that the homemade formula recipes that many parents are reportedly turning to could be potentially fatal.

do NOT recommend making your own formula,’ Adams wrote, ”The AAP [American Academy of Pediatrics] strongly advises against homemade formula.’

‘These [options] are not safe and not FDA approved — infant deaths have been reported.’

Despite her claims, there have been no recent reports of deaths related to homemade baby formula.

As of April 24, CBS News reports, 40 to 50 percent of the top-selling baby formula products were out of stock at stores across the country, according to an analysis from Datasembly, which tracked baby formula stock at more than 11,000 retailers.

National out-of-stock levels jumped nine percentage points from 31 percent to 40 percent between April 3 and April 24, according to an analysis from Datasembly.

Parents have been turning to homemade recipes tracked down online to hold them over through the shortage, but Adams and other authorities say this practice is not safe.

‘Although feeding babies regular milk or making homemade formula was common decades ago, it is not a safe or recommended practice,’ wrote Dr. Steven A. Abrams, on Healthychildren.org, ‘Formula mixtures made from online or other resources may not have vital components, such as enough iron or vitamins for a baby.’

Or, they may have too much salt or other nutrients that your baby’s kidneys and liver cannot handle in large amounts.’

In 2021, the FDA issued a warning against homemade formulas after a number of infants fed off of recipes were hospitalized with hypocalcemia, a deficiency of calcium in the blood that can lead to seizures.

‘The FDA has stated that the agency does not recommend that consumers make infant formulas at home because of potentially very serious health concerns,’ a spokesperson for the FDA said last year.

‘It is not safe,’ Dr. Lisa Gaw, a pediatrician with Texas Children’s Urgent Care in Austin told KXAN, Austin after the FDA’s warning, ‘There’s contamination leading to infection and illness risk and then there is a risk that your child may not be getting everything that he or she needs.’

‘When they are this young their bodies are still developing and the way they process things are a little different than say a one-year-old toddler. Too little or too much of any nutrient, whether it’s vitamin or mineral, can be harmful to an infant in the age group. They’re still developing.’

Experts have also warned against diluting formula or replacing it with cow’s milk.

Doing so is ‘not nutritionally comparable with breast milk or infant formula,’ according to Brian Dittmeier, senior director of public policy at the National WIC Association, and could cause nutrient deficiencies that can have a ‘profound impact on an infant’s growth and development.’

He said any parents who are struggling to find formula can contact their local WIC agencies and food banks for help locating some in their communities.

The advice comes as parents are shelling out as much as $800 on eBay for cans of baby formula that normally cost $50, and are canvasing stores across entire regions to track down formula.