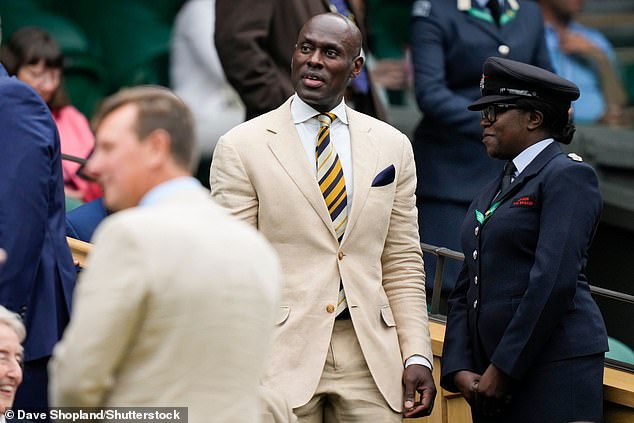 Today, the courageous Black Lives Matter activist who saved a fellow protester during altercations at an anti-racism rally has arrived at Wimbledon.

In June 2020, Patrick Hutchinson intervened to save a battered demonstrator; this morning, he disclosed that he had received an invitation to the prestigious Royal Box to watch the tennis.

In an Instagram post, Mr. Hutchinson informed his fans that he was traveling to the Wimbledon, South London, courts while donning a smart cream suit and stylish eyeglasses.

And he sent the chairman Ian Hewitt-signed invitation to the Royal Box, where he’ll be mingling with Wimbledon’s most notable visitors for the day.

The box, which has 74 seats for hand-selected distinguished fans, offers spectacular views of the center court and invites guests to the Clubhouse for lunch, tea, and beverages.

After picking up a protester whose “life was under jeopardy” during the stampede-like demonstration in June 2020, Mr. Hutchinson became famous.

When a photo of Mr. Hutchinson carrying a bleeding white protester onto his shoulders during violent battles close to Trafalgar Square in June 2020 went viral, he received praise.

The grandfather and personal trainer explained why he interfered and what he believes his actions would motivate others to do in the future.

Relatives once stated that he “wouldn’t hurt a fly.”

According to the chairman, the Royal Box at Wimbledon is crowded with spectators who “represent the Club’s goal to recognize people who contribute toward making global society better for everybody.”

According to Wimbledon, the guests’ accomplishments are a “source of inspiration and gratitude” and now Mr. Hutchinson is one of them.

After the 2020 protest, the BLM supporter told Channel 4 News: “If the other three police officers who were around when George Floyd was killed had thought about intervening, and stopping their colleague from doing what he was doing, like what we did, George Floyd may still be alive today.”

“All I want is equality for us all.

“I want things to be fair for my children and grandchildren because the scales are currently tipped in an unfavorable direction.

Reporter Keme Nzerem was asked about Mr. Hutchinson’s knowledge of the man he helped, who he described as “half unconscious.”

When he arrived, he was already lying on the ground, he observed.

“It was quite frantic; there were so many people attempting to protect him that it was almost like a stampede.”

The men entered the room and surrounded him with a small cordon in order to prevent further physical harm.

When asked about how he felt about being hailed as a hero, he continued, “I was just the one captured on camera with him on my shoulder, but all these guys were all party to it.

Without their protection, I probably would have been trampled beneath it as well. It was a group effort, therefore.

I had no plans to go up there, Mr. Hutchinson continued. My acquaintance told me to go defend the women and the children and to stop these young men from getting into any problems while I was at home caring for my grandchildren.