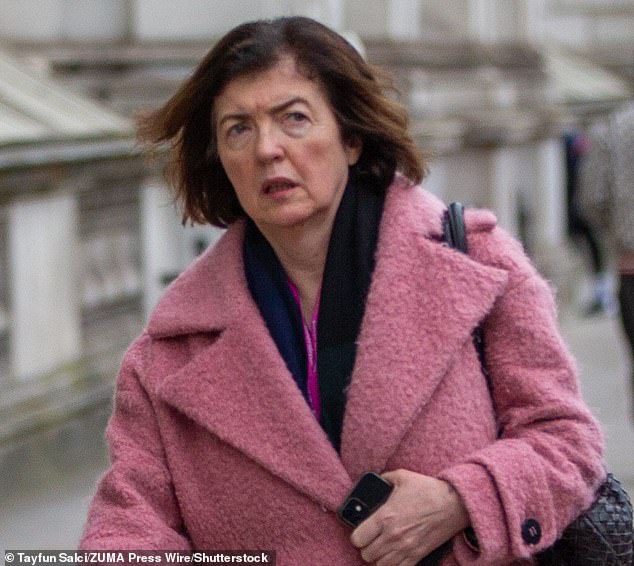 However, at the height of the Troubles, Sue Gray’s old pub near Newry in Northern Ireland seemed to have its own ‘wine time Fridays,’ with revellers dancing and drinking well past official closing time.

PICTURED: Transgender woman wrongly accused of being Texas school shooter, as Arizona GOP rep is forced to delete tweet claiming the real mass-murderer was ‘transsexual leftist illegal alien’ , and other top stories from May 26, 2022.

During a stand-up show in Brighton, the Northern Irish comic recalled the Whitehall ethics chief’s past life as a landlady.

‘Let me tell you about Sue Gray,’ Kielty announced.

‘Sue Gray used to own the Cove Bar in Mayobridge, Co Down, 10 miles from where I grew up on the other side of the mountain. When she was working for the Northern Ireland Civil Service, she bought the bar.

‘She married a country-and-western singer from Portaferry. And this bar was meant to be officially shut most Friday nights at half eleven… and was flat to the mat with Willie Nelson at twenty to f**king two!’.

In her former job as director-general of propriety and ethics in the Cabinet Office, Ms Gray had enormous power and long experience in Westminster scandals, and developed a fearsome reputation among ministers and officials.

It saw her described as the most powerful civil servant you have never heard of.

Epithets applied to the 64-year-old include ‘all-powerful’, ‘formidable’ and ‘enforcer’.

Her inquiry into the so-called Plebgate affair in 2012 led to the resignation of minister Andrew Mitchell for verbally abusing police on duty in Downing Street.

And her investigation into Damian Green led to his forced resignation in 2017 after she discovered he had lied about pornography found on his Commons computer.

But her life has not been completely standard mandarin.

According to her cousin David Howgill, Ms Gray didn’t have much time for boyfriends until she met Bill Conlon, a Northern Irish part-time country and western singer, from the fishing village of Portaferry in County Down. ‘I think he was her first and only love really,’ he said.

The couple, both then 27, married in March 1985 at Newtownards register office near Belfast while Sue was taking a career break. A church wedding was out of the question as Bill, a joiner, was a divorcee.

It had been Bill’s dream to run a pub – preferably one big enough to double as a music venue. An opportunity arose when the Cove Bar near the border town of Newry needed new management.

At this time, Newry was a key battleground between the British Army and the IRA. A month before their wedding, nine police officers were killed and 40 people injured in an IRA mortar attack on the RUC base in the town.

Ms Gray’s Newry sojourn is intriguing. According to Peter Cardwell, a former special adviser to four Cabinet Ministers: ‘Some speculated that she was a spy – something she denies.’

Last year she told the BBC: ‘I loved it, loved it at the time, I’d never do it again.’

In one extraordinary moment, Ms Gray even faced down an armed IRA gang who tried to hijack her car.

She was confronted by Republican paramilitaries while driving alone at night along a country road, according to a friend.

‘She said that one night she had a very heavy cold and one of her staff wanted to get off early and she closed the bar down,’ the friend said.

‘She drove the person home and was returning from South Armagh. She came across a light in the middle of the road and was ordered to stop.

‘She thought initially it was the Army and didn’t realise the guy was a paramilitary. He said to her, “We want the car, get out.” And she just bluntly refused and said, “No.” Taken aback, he said, “What?” And then he said to her, “Oh, you’re f**king English as well?” Just as the situation looked like it was set to escalate, a voice came out of the darkness and said, “That’s Sue Gray from The Cove, let her go on.”

‘Two or three nights later, she was working in The Cove and a well-dressed man was at the bottom of the bar talking with people, before nodding at her and saying, “Sue, did you get home alright the other night?”‘.

The Cove Bar has long since closed and a car dealership operates on the site.

In 1987, the couple returned to London where their two sons, Liam and Ciaran, were born.

Sue resumed her Civil Service career, working across Whitehall in transport, health and work and pensions, before joining the Cabinet Office in the late 1990s.

Relatives said Liam and Ciaran, now in their 30s, inherited their parents’ sense of social justice.

Her parents were poor but hard-working Irish immigrants to Britain – her father, Leo, a furniture salesman, and her mother, Anastasia, a long-serving barmaid – who settled in Tottenham, North London, in the early 1950s. Ms Gray was born in 1957, followed by her brother Kevin three years later, and went to a Catholic school in North London.

In 1987, the couple returned to London where their two sons, Liam and Ciaran, were born.

Ms Gray resumed her Civil Service career, working across Whitehall in transport, health and work and pensions, before joining the Cabinet Office in the late 1990s.

In January she was drafted in from the Department for Levelling Up, Housing and Communities after Cabinet Secretary Simon Case quit his role leading the inquiry.

He was forced to step down after it emerged a December 2020 quiz was held in his own department that he was aware of and spoke at.

From 2018 to 2021 she served as the Permanent Secretary of the Department of Finance at the Northern Ireland Executive.

She returned to London to head up work on the Union in 2021. But she admitted last year she wuld not have come back to London if she had won the top Civil Service post in Northern Ireland.

Ms Gray applied to run the service after the retirement of previous boss David Sterling, but the power sharing executive overlooked her and two other candidates, leaving the post unfilled.

She told the BBC at the time: ‘Why didn’t I get the job? I’m not sure I’ll ever quite know but I suspect, you know, I suspect people may have thought that I perhaps was too much of a challenger, or a disrupter.

‘I am both. Perhaps I would bring about… too much change.’