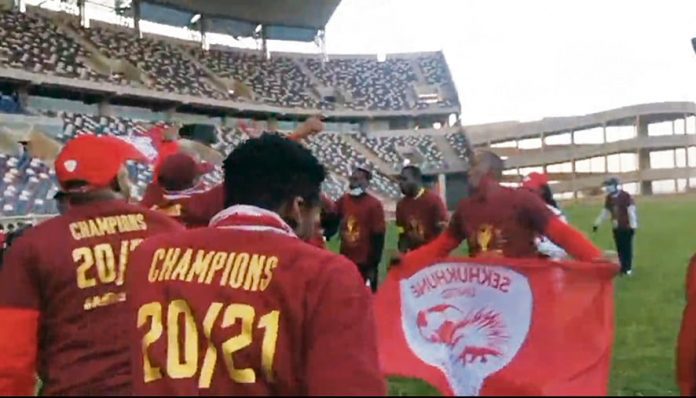 Sekhukhune United is a party-crushing team! They resemble the snot-nosed, mischievous child who takes a sharpened nail to a jumping castle party. Amakhosi’s 53rd birthday festivities were ruined after they were defeated 1-0 at the FNB Stadium on Saturday night.

They were unconcerned about the planned festivities and how the Amakhosi family, friends, and supporters were preparing to rejoice.

Sekhukhune had their own intentions and brought home the three points, leaving FNB in a state of sadness and quiet.

On Friday, Chiefs leader Kaizer Motaung took the young Chiefs squad on a tour to the old Amakhosi clubhouse in Phefeni Soweto, where it all began for the Glamour Club. However, it appears that the tour did not encourage the young Chiefs to win and give the club a three-point gift.

After Sekhukhune’s three-point smash and grab, they were instead despondent, fatigued, and drained.

The loss has also weakened Chiefs’ chances of upsetting Mamelodi Sundowns, who are effortlessly cruising to the league championship. Chiefs now trail Sundowns by 13 points with the same number of matches played. According to the Chiefs website, Sekhukhune winger Vusi Mncube scored the lone goal against the run of play in the 48th minute.

Sammy Seabi went down after a challenge from Samkelo Zwane in the second minute, but the referee disregarded the visitors’ appeals for a penalty.

Early play was sloppy as both teams struggled to adapt to a playing surface that was proving challenging. S’fiso Hlanti’s foul on Tlotlo Leepile in the sixth minute resulted in a booking that will keep him out of next week’s match against AmaZulu.

After 14 minutes, a Chiefs free kick on the edge of the Sekhukhune penalty area sparked a bizarre sequence of events. Keegan Dolly and Nkosingiphile Ngcobo set up Reeve Frosler for a shoot on goal during a drill on the training field. Badra Sangare deflected the ball into the path of Bonfils-Caleb Bimenyimana, who appeared to lose his balance at the vital time and was unable to tap in the rebound.

Itumeleng Khune was forced to stop Chibuike Ohizu’s glancing header as Sekhukhune launched an offensive raid. Back at the opposite end, the referee, Siyabulela Qunta, and the Chiefs captain, Keagan Dolly, were prone on the ground after colliding accidentally while observing the action. Prior to resuming their positions, both were treated.

Yusuf Maart’s attempt from 20 yards out that nearly missed the goal in the 26th minute made the audience even more jubilant than it already was.

Bimenyimana was getting into advantageous positions; on 32 minutes, he came close with a header at the far post that went just wide, and a few minutes later, he nearly converted Maart’s cutback at the near post.

The score at the halftime break was 0-0. It took only three minutes of activity in the second half to break the tie. Zitha Kwinika was attempting to collect a pass from Edmilson Dove at the halfway line when he was dispossessed by Mncube, who then sprinted through to defeat Khune.