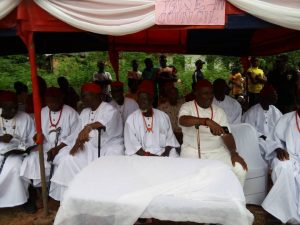 The Owerre-Ezukalla Ishishi Square was filled to capacity as the traditional ruler, Igwe Thomas Ogbonnaya, his cabinet members, people from the eight villages that make up the community including friends and well-wishers converged to celebrate the 2021 oriri Ji festival of the town.

The event, which was a collaborative effort of the Igwe-in-Council, Owerre- Ezukalla Culture and Heritage and Owerre-Ezukalla Development Union, was also used to confer chieftaincy titles to distinguished personalities.

Correspondent Queen Anigbogu reports that the oriri Ji, otherwise called Otute commenced with the Igba Wuru Aja Cultural Dance, several shots of canon gun, which heralded the entrance of the traditional ruler and his cabinet into the Ishishi Square, already filled with people from all walks of life in glamorous attires.

Performing the kola nut rituals, Igwe Ogbonnaya appreciated God for his goodness in the lives of his subjects and the unity among the traditional rulers in Orumba North and South council areas praying that evil will be far away from them.

Speaking on the essence of the day, the President General, Owerre-Ezukalla Development Union, ODU, Chief Sir Anayo Emejue, described the festival as a display of the rich cultural heritage of the town as well as an opportunity to specially recognize notable personalities within and outside the community for their contributions to the development of the community.

For the Transition Committee Chairman, Orumba South council area, Chief Cyprian Okereke, the turnout of people for the event was impressive and a pointer that the traditional ruler is loved by his people.

The Special Guest of Honor, who is also the standard bearer of the All Progressives Grand Alliance, APGA, Professor Chukwuma Soludo thanked them for their support and promised that if elected, their share of democracy dividends shall not elude them as he will make the Ogba Cave a world tourist center.

In their separate comments, the chairman, Culture and Tourism, Chief Chukwuagolum Uchenna, and patron of ODU, Chief Ogechukwu Nduche, described yam as a very important crop in Igbo Land.

Some of the personalities, who were conferred with chieftaincy titles included Chief Medical Officer, COOUTH, Amaku Awka, Dr. Josephat Akabuike, Chief Patrick Ikwueto and Chief Ugochukwu Onyeka among others while the member representing Orumba North and South Federal Constituency, Chief Okwudili Ezenwankwo and Senator Victor Umeh were among dignitaries that graced the occasion.