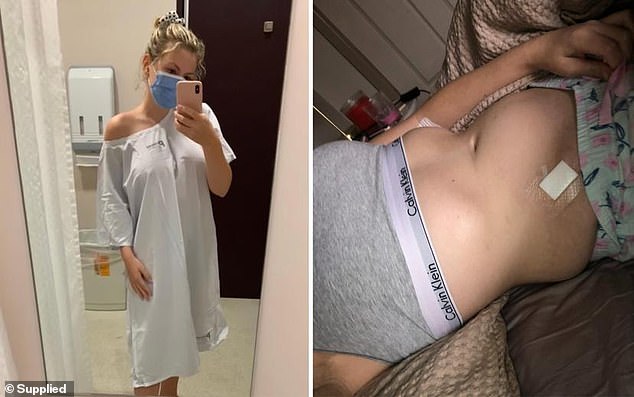 After a sudden weight gain she attributed to stress turned out to be an indication of potentially fatal ovarian cancer, a young student has issued a warning to women.

The then 26-year-old, who was working part-time and studying journalism, blamed her recurrent ailments on her hectic lifestyle.

When the recurrent symptoms turned into excruciating stomach ache in July, Ms Fitzgerald decided it was time to see a doctor.

She was referred to doctors, who revealed that her expanding abdomen was harboring ‘borderline’ ovarian tumors, which may have progressed to deadly cancer if she had neglected her symptoms any longer.

‘I couldn’t believe it.’ It never occurred to me that it would be possible… She told 7News, “I was just 26 years old.”

‘When my stomach became incredibly bloated, I just thought I was getting fat. I exercised relentlessly for quite a while and I was so frustrated my stomach was getting larger.’

Ms Fitzgerald said her gynaecological oncologist explained borderline tumours are like having a ‘halfway cancer’.

A 13cm tumour was found on her right ovary, a smaller one on her left, and several other little growths were scattered throughout her abdomen.

In August 2020, she underwent a laparotomy to have the two largest tumours, her left ovary, fallopian tube, omentum, and appendix, removed.

The major operation left the young woman ‘medically infertile’, diminishing the possibility she may later be able to conceive naturally.

Despite the surgery, Ms Fitzgerald still needs to regularly monitor her body to ensure the ‘abnormal cysts’ in her pelvis do not turn sinister.

She also suffers from chronic pain, particularly when she ovulates, and has been left with a large scar running from her belly button to her bikini line.

While Ms Fitzgerald continues to grapple with her new relationship with her body, she feels extremely lucky she was able to freeze seven eggs from her remaining ovary in April last year for when she is ready to have kids.

She is urging other women to look out for the ‘subtle and easy-to-overlook’ signs of ovarian cancer, which can include abdominal bloating or pain, loss of appetite, frequent urination, unexplained nausea, excessive fatigue, or irregular periods.

‘Looking back there were a lot of signs I didn’t take seriously that I now know are symptoms,’ she said.

All funds raised from the sale of teal undies will go to Ovarian Cancer Australia , allowing us to continue to advocate for people impacted by ovarian cancer, fight for progress and increased awareness, and deliver practical support and counsel to women living with ovarian cancer.