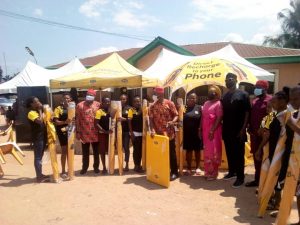 Okakwu Victor Awogu opened the Okposi which is their own New Yam Festival, with prayers of Thanksgiving.

He noted that the age long feast, celebrated yearly, which also marked the beginning of a new planting season, is a culture that binds the community.

Okakwu Awogu added that civilization came to Ossomala early but it did not take away their culture hence the need for Igbo people to embrace their culture to have focus in life.

The traditional ruler of Ochuche Umuodu, Igwe Vincent Ijeoma who felicitated with the community, advised them to always exhibit the spirit of brotherhood which came with the festival.

Throwing more light on the culture and activities in Ossomala,a town surrounded by river and rich soil for agriculture, Chief Patrick Nwadialo made it clear that there is nothing idolatry about the Okposi Festival saying that the community is reckoned for its agricultural produce.

For the new Owelle of Ossomala Chief Felix Awogu, Okposi Festival is their way of life calling for projection of Igbo culture to leave a legacy for the younger generation while Chief Eloka Chukwuma,an illustrious son of Ossomala, said the festival is very significant to the community.

Mrs Amaka Awogu who spoke on the supportive role of women to the festival, advised mothers to always teach their children  Igbo culture and value to  keep them abreast  of the happenings in their community.