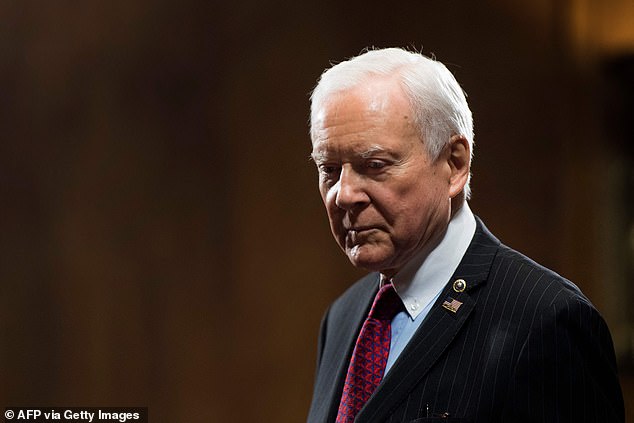 A conservative on most economic and social issues, he nonetheless teamed with Democrats several times during his long career on issues ranging from stem cell research to rights for people with disabilities to expanding children’s health insurance.

He also formed friendships across the aisle, particularly with the late Senator Edward M. Kennedy.

He was also noted for his side career as a singer and recording artist of music with themes of his religious faith, The Church of Jesus Christ of Latter-day Saints.

He is survived by his wife, Elaine, their six children, and dozens of grandchildren.

Details regarding funeral arrangements have not yet been released.

Orrin Grant Hatch was born on March 22, 1934, in Homestead Park, Pennsylvania on the outskirts of Pittsburgh.

His mother was a homemaker and his father was a union carpenter and plaster lather, who struggled to raise nine children in the aftermath of the Great Depression.

When Hatch was just ten years old, he was deeply impacted by the loss of his older brother, Jesse Hatch, who was killed in action in Europe during World War II.

In high school, he played on the varsity basketball team, fought as an amateur boxer, and served as student body president.

Hatch enrolled in Brigham Young University in 1952, paying his way through college by working as a janitor during the school year and as a journeyman lather in the summers.

When he was nineteen years old, Hatch served a two-year mission for the Latter-Day Saints church in Ohio and Indiana, which he described as one of the most formative experiences of his life.

In 1957, after returning from his mission, Hatch married Elaine Hansen in the Mormon Temple in Salt Lake City. The couple went on to have six children.

He was one of only a few Senators in history to serve as Chairman of three major Senate Committees: the Senate Labor and Human Resources Committee (now called the Health, Education, Labor and Pensions Committee), the Senate Judiciary Committee, and the Senate Finance Committee.

In total, Hatch spent 32 of his 42 years in Congress as either the Chairman or Ranking Member of a major committee.

Hatch authored or coauthored a number of key laws, including the the Americans with Disabilities Act, which prohibits discrimination against persons with disabilities.

A stanch conservative, he fought to get conservative judges confirmed to the federal courts, and took a leading role in Justice Clarence Thomas’ Supreme Court confirmation hearings.

At the end of his term in January 2019, Hatch was the ninth-longest-serving US Senator in American history.

He added: ‘Senator Hatch touched the hearts of countless individuals, and I know I speak for all of them when I say he will be dearly missed.’