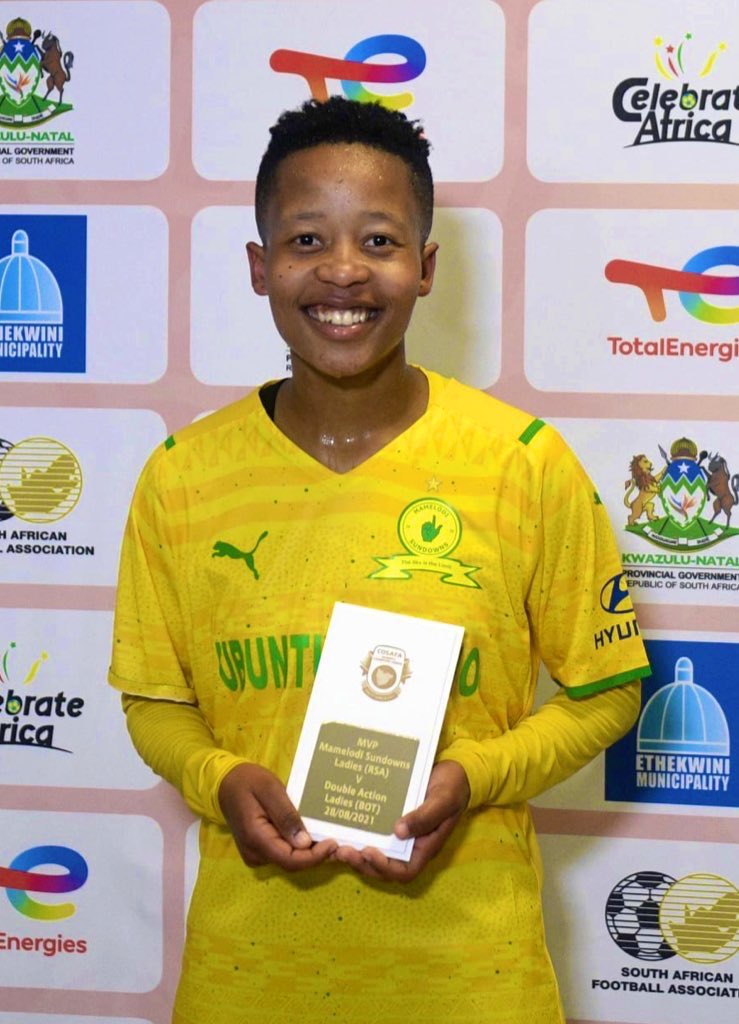 Mamelodi Sundowns Ladies are ready to defend their championship at the CAF Women’s Champions League event, which will be held in Morocco from 30 October to 13 November 2022. They won the inaugural edition of the tournament last year. Banyana Ba Style won last year’s competition without surrendering a goal in remarkable fashion.

Oratile Dikgosi Mokwena, a cousin of former Sundowns great player Lebohang Mokoena, was one of the primary cornerstones of that victorious side. Throughout the competition, Oratile was a constant presence as The Brazilians basked in the aura of invincibility.

Last year, Mokwena won the ‘Woman of the Match’ title after the Chloorkop-based team defeated Nigeria’s Rivers Angels 1-0 in their second Group B match.

Mokwena believes that Sundowns Ladies will need to take a fresh approach as they prepare to defend their continental championship.

“The preparations for Morocco have been excellent due to the high level of competition in the Hollywoodbets Super League. As the tournament’s defending champion, every team will seek to distinguish themselves by being the first to defeat us. Therefore, we must approach games differently in order to avoid surprises. The midfielder from Ga-Rankuwa stated, “We are cognizant of the stakes in Morocco and will not take anything for granted.”

In Group B, Coach Jerry’s squad faces Nigeria’s Bayelsa Queens, Egypt’s Wadi Degla, and Congo’s TP Mazembe. With several new sides preparing to compete in Morocco, the relentless midfielder thinks that complacency is not an option.

“We are completely aware of the new teams competing in this year’s tournament. The technical team has been really helpful in evaluating their strengths and limitations, despite the fact that I do not know very much about them. There is a great deal of expectation on us to defend our title, but we are up to the task. Mokwena noted that the only thing that can stop us is ourselves.

The diligent midfielder also believes that the current team is stronger than the previous year due to the addition of new players.

“A couple of great players have joined the squad as we prepare to defend our continental championship” (Miche Minnies, Tiisetso Makhubela, and Gabonnelwe Kekana). All of them have successfully blended into the team’s ideology and culture. Their performance in the Hollywoodbets Super League has been outstanding; thus, we have a good chance in Morocco with them,” said Oratile.

Oratile has achieved enormous success with The Brazilians since joining Sundowns Ladies in 2016 from TuksSport High School. The 21-year-old midfielder won the 2019/2020 SAFA National Women’s League and was named to the 2020/21 Hollywoodbets Super League Team of the Year.

The Sundowns Ladies have already arrived in Morocco and will face the Bayelsa Queens of Nigeria in their inaugural match on October 31, 2022.