Skip to content
Home » News » News » Only lawyers, engineers, and scientists in the UK have inflation-matching earnings 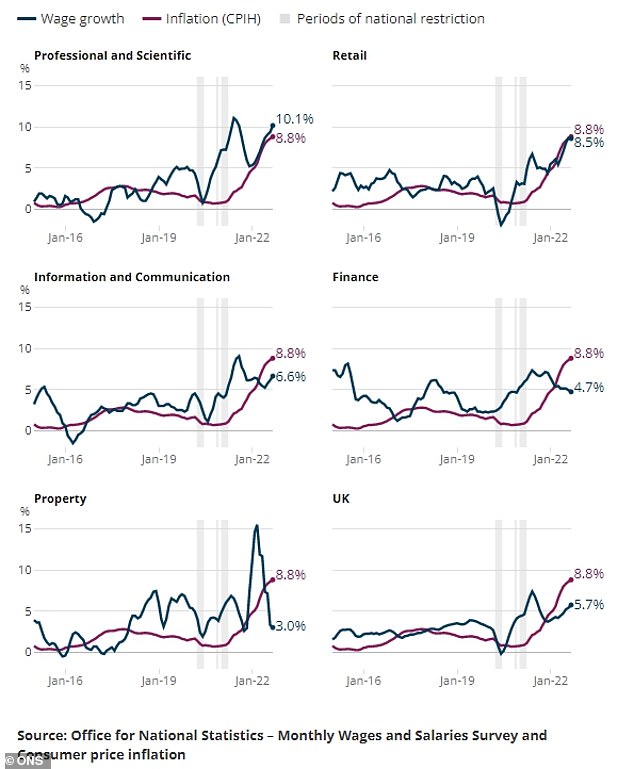 The Office for National Statistics discovered that lawyers, engineers, and scientists are among the few professions whose salaries have kept pace with the rising cost of living.

In a recent survey released today, it was discovered that normal salary growth (excluding bonuses) in only one industry has outpaced inflation this year.

Normal pay in the professional and scientific sector, which includes legal services, management, engineering, and scientific research, increased by 10.1% from July to September.

This kept it above the CPIH rate of inflation throughout that time period, a metric that incorporates the cost of both commodities and housing.

Since the second part of last year, people in other industries, such as local government and education, have seen their wage increase remain below inflation.

If compensation continues below inflation, employees will experience a pay reduction in real terms, since a greater proportion of their salaries will be required to purchase the same commodities.

According to the ONS, average salaries in the United Kingdom have increased at a slower rate than prices.

In July to September 2022, normal earnings increased by 5.7% annually, while total pay, which includes bonuses, increased by 6%.

In October, the rate of inflation as measured by the CPIH reached 9.6%.

Although regular pay growth in the finance business lagged behind inflation from January to March, total compensation, which includes bonuses, increased faster than prices from April to June.

In recent years, pay growth in other areas, such as real estate, technology and communication, retail, and finance, has been substantially above inflation, according to the ONS.

From January through June of this year, however, rising prices surpassed pay growth in all of these industries.

This was somewhat offset for workers in the banking industry, such as bankers, by greater bonuses for a portion of the year, according to the ONS.

Although regular pay growth in the finance business lagged behind inflation from January to March, total pay, which includes bonus pay, increased faster than prices from April to June.

In the three months leading up to September, it lagged behind inflation at 6.3%.

The ‘bonus season’ for the banking business is normally between December and March, with overall pay increase increasing by 15.9% between October and December of last year.

According to the ONS, this was the highest rate since the 2013 introduction of the bonus ceiling for bankers.

The property and professional and scientific industries also had a larger-than-usual increase in total pay in March of this year, when bonuses averaged £261 and £241 per week, respectively, the highest levels on record.

The ONS stated that a record number of job openings might be a factor in pay rise as firms battle to recruit and retain workers.

In 2022, industries having a greater proportion of public sector occupations, such as education and public administration, saw some of the lowest wage increases.

The ONS stated that a record number of job openings may be a factor in pay rise as firms battle to recruit and retain workers.

From March to May of this year, the number of job openings in the United Kingdom reached a new record high of 1,3 million.

In the months of August and September, there were 54% more job openings than before the Covid epidemic.

Public sector employees were among the hardest-hit by the cost-of-living crisis, according to the ONS.

In the period from July to September, the public sector saw a 2.2% increase in regular pay, while the private sector saw a 6.6% increase.

Along with arts and recreation, mining, and power and water, industries with a greater proportion of public sector jobs, such as education and public administration, have experienced the lowest wage growth in 2022.

»Only lawyers, engineers, and scientists in the UK have inflation-matching earnings«