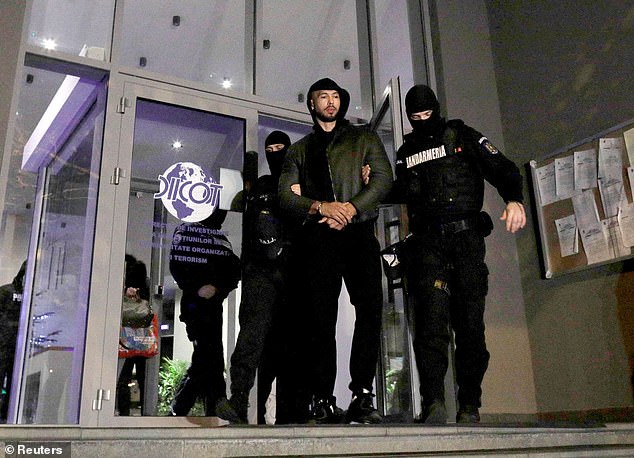 One of the influencer brothers has reportedly been rushed to the hospital, and Andrew Tate tweeted a link to a Romanian article stating that the “Matrix has attacked me.”

Tate, a British national and former professional kickboxer with 4.4 million Twitter followers, is currently being held in detention in Romania alongside his brother Tristan.

In connection with an ongoing investigation into allegations of rape and human trafficking, they were detained last week.

Tate tweeted a link to the Romanian news outlet Spy News today, which reports that one of the brothers was sent to the hospital during a regular medical check while they were being held.

Police officers accompany Andrew Tate and Tristan Tate outside the Bucharest office of the Directorate for Investigating Organized Crime and Terrorism.

The 36-year-old stated in an unclear tweet: “The Matrix has attacked me.” However, they are mistaken; an idea cannot be killed. difficult to kill

According to reports, one of the brothers told a doctor about a pre-existing medical condition, which led to a consultation at a hospital in Bucharest.

The website states that they are currently back in a correctional facility.

It follows the earlier this week seizure of four more high-end vehicles as a result of the probe into a social media personality.

In addition to the 11 vehicles confiscated in searches last week, prosecutors looking into the matter also seized the extra vehicles, according to Ramona Bolla, a spokeswoman for the Romanian anti-organized crime organization DIICOTs.

According to local media, at least seven of the impounded automobiles are limited editions with a retail value of up to $300,000 and are registered to Tate and his brother Tristan, who was also arrested last week in the same case.

Some of the other vehicles are either unregistered or lack the necessary paperwork.

Bolla added that the probe has so far resulted in the seizure of more than 10 homes or parcels of property owned by businesses belonging to the Tate brothers.

Aston Martin Vanquish S Ultimate and a Rolls-Royce Wraith from the automaker’s Black Badge line are two vehicles the authorities confiscated that have both shown in footage that Tate has released online.

On December 29, two additional female suspects, Georgiana Naghel and Luana Radu, were detained in Bucharest on charges of rape, human trafficking, and organizing a gang.

They have refuted all of the accusations, and Tate’s attorney, Avocat Vidineac Eugen Constatin, has stated that they would challenge the judge’s ruling.

In a statement released last week, DIICOTs claimed to have identified six victims who had been sexually exploited and the targets of “acts of physical violence and mental coercion” by group members.

According to the agency, two British individuals in the case intimidated victims into engaging in pornographic behaviors in order to obtain’significant financial benefits.’ They did this under the guise of love.

According to Bolla, all four suspects are scheduled to show up in a Bucharest court the next week to have their pleas against the judge’s decision to extend their arrest warrants from 24 hours to 30 days considered.

The Tate brothers will also be present in court the following week to contest the confiscation of some of their possessions.

»One of the TATE brothers hospitalized after being arrested«