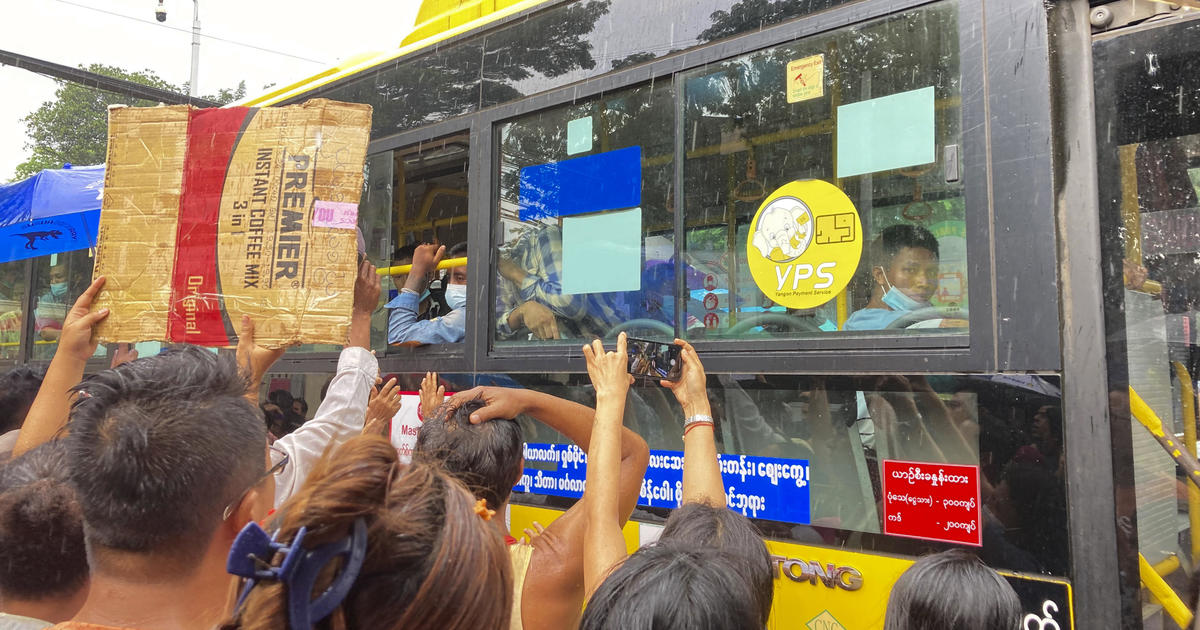 As part of a sweeping prisoner amnesty commemorating the country’s National Victory Day, the military-controlled government of Myanmar released and deported an American, an Australian scholar, a Japanese filmmaker, and a former British ambassador, it was revealed Thursday in Bangkok.

The imprisonment of the foreign nationals had been a subject of contention between Myanmar’s leaders and their respective home countries, which had advocated for their release.

People search for their loved ones on a bus carrying Insein Prison inmates who were released on November 17, 2022, in Yangon, Myanmar. AP

According to media sources, naturalized American Kyaw Htay Oo returned to Myanmar, his nation of birth, in 2017. Since his arrest in September 2021 on terrorism allegations, he has been detained.

U.S. Secretary of State Antony Blinken, speaking at a news conference on the sidelines of the Asia Pacific Economic Cooperation forum in Bangkok, applauded the release of the prisoners, describing it as “one bright spot in what is otherwise an incredibly dark time in Burma, where terrible violence is being perpetrated against innocent Burmese.”

Jake Sullivan, the national security advisor for the United States, tweeted that the Biden administration was “pleased to hear” that Kyaw Htay Oo was “on his way home from jail in Burma, where he was wrongly incarcerated for over 14 months.”

Kyaw Htay Oo, a U.S. citizen who was unfairly imprisoned in Burma for more than 14 months, is on his way back to the United States.

We shall continue to demand the release of Burma’s unjustly imprisoned thousands of political prisoners.

“We will continue to push for the release of thousands of unjustly imprisoned political prisoners in Burma,” said Sullivan, referring to Myanmar by its previous name, which was used prior to the junta’s takeover and is still used by the U.S. government.

According to Assistance Association for Political Prisoners, a rights monitoring organization, 16,232 people have been arrested in Myanmar on political accusations since the military deposed Aung San Suu Kyi’s democratically elected administration in February of last year.

As of Wednesday, AAPP claimed that 13,015 of those arrested remained in custody. According to the group, at least 2,465 people have been slain by security personnel within the same time period, however the number is believed to be far higher.

Tim O’Connor of Amnesty International Australia applauded the decision to free Turnell, stating that, like many others, he should have never been detained or imprisoned.

“Amnesty International continues to advocate for the release of all those unfairly detained for exercising their human rights peacefully,” he said. Thousands of those imprisoned in Myanmar since the coup have committed no wrongdoing.

The spokeswoman for the Japanese government, Hirokazu Matsuno, stated that officials have been in contact with Kubota, a 26-year-old documentary filmmaker from Tokyo, and that he is in good condition. According to the Japanese Embassy in Yangon, he left Myanmar on a flight to Bangkok on Thursday and was expected back in Japan on Friday morning.

Bowman and Turnell were likewise anticipated to depart Myanmar on Thursday.

Turnell, a 58-year-old associate professor of economics at Sydney’s Macquarie University who served as Suu Kyi’s adviser, was seized by security authorities in Yangon days after the military takeover of last year. In September, he was given a three-year term for breaking the country’s official secrets statute and immigration law. Suu Kyi and three of her former Cabinet colleagues were convicted in the same trial, which took place in a closed court with a gag order prohibiting their attorneys from discussing the proceedings.

Fellow Tim Harcourt, an Australian economist, expressed his happiness through email upon learning of the release of his longtime friend Sean Turnell. He commended the Australian government, campaigners, and Turnell’s friends and coworkers for their efforts to secure his release.

“Sean’s goal was to assist the people of Myanmar in escaping poverty and achieving their economic potential. Never should he have been imprisoned for performing his professional duties as a development economist “he remarked.

Since the takeover, which sparked widespread protests that the military government quelled with lethal force and armed resistance that some U.N. experts now classify as civil war, Myanmar has remained in upheaval.

Kubota was arrested on July 30 in Yangon by plainclothes police after photographing and filming a tiny, spontaneous protest against the military. The prison court convicted him of inciting and other offenses last month and sentenced him to 10 years in prison.

Since gaining control, the military has suppressed protest coverage, conducted raids on media outlets, imprisoned dozens of journalists, and canceled the licenses of at least a dozen publications.

The majority of individuals detained have been charged with incitement for allegedly inciting terror, distributing false information, or agitating against a government official.

Some of the closed media outlets have continued to operate without licenses, and numerous Myanmar journalists operate clandestinely, travelling from safe house to safe house, hiding in isolated border districts, or residing in exile.

Kubota was the fifth foreign journalist to be detained in Myanmar since the military took control of the country. Citizens of the United States Nathan Maung and Danny Fenster, who worked for local media, as well as freelancers Robert Bociaga of Poland and Yuki Kitazuma of Japan, were deported prior to completing their prison terms.

Danny Fenster discusses life inside the notorious Insein Prison in Myanmar at 05:59

In August, Bowman, 56, a former British ambassador to Myanmar who ran a business consulting firm, was arrested in Yangon alongside her husband, a Myanmar national. In September, she was sentenced to one year in prison for failing to register her residency.

Many were jailed on accusations relating to the protests, including Section 505(A) of Myanmar’s penal code, which makes it a crime to transmit statements that cause public disorder or terror or spread false news and carries a maximum three-year prison sentence.

Kyaw Tint Swe, a former minister for the office of the State Counsellor, Than Htay, a former member of the Union Election Commission, and Lae Lae Maw, a former chief minister of Tanintharyi region who was sentenced to 30 years for alleged corruption under Suu Kyi’s administration, were among those released, according to MRTV.

Author Maung Thar Cho, pro-democracy activist Mya Aye, and Myo Nyunt, spokeswoman for Suu Kyi’s National League for Democracy, were among the first to be released from Yangon’s Insein prison on the day the military seized power on February 1, 2021.

Mya Aye declared defiantly to the crowd gathered outside the prison after his release, “I will always stand with the people of Myanmar.”