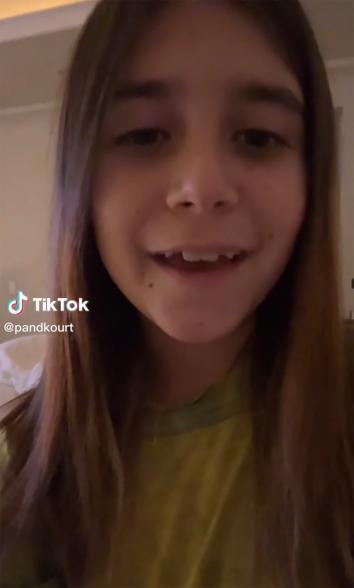 The children of Kourtney Kardashian made fun of their relatives in a TikTok video parodying a 2014 “Keeping Up With the Kardashians” parody.

The founder of Poosh joined her 10-year-old daughter Penelope and 8-year-old son Reign in lip-syncing to a viral video of Sims characters fashioned after herself, Kim Kardashian, and Khloé Kardashian.

In “Soda Drama,” Kim’s avatar famously advised her sisters to get orange soda at a restaurant, but the sisters instead chose strawberry soda.

“I am very stunned and betrayed right now,” Reign stated as Kim, age 42, while portraying her.

Penelope portrayed her mother, while Kourtney portrayed a waiter.

When Penelope made her account a year ago, it remained disabled until she returned with her mother to the app. In November 2021, Kourtney clarified that the account was maintained by an adult.

Kim and her eldest daughter, North, opened a joint account during the same month.

This week, the 9-year-old has been pranking her family in TikTok videos, including pretending to shave her mother’s eyebrows and scribbling all over her brother Psalm’s face.

North and Penelope frequently appear in each other’s Instagram photos. In 2018, Kim told her Instagram fans that the cousins are “great friends.”