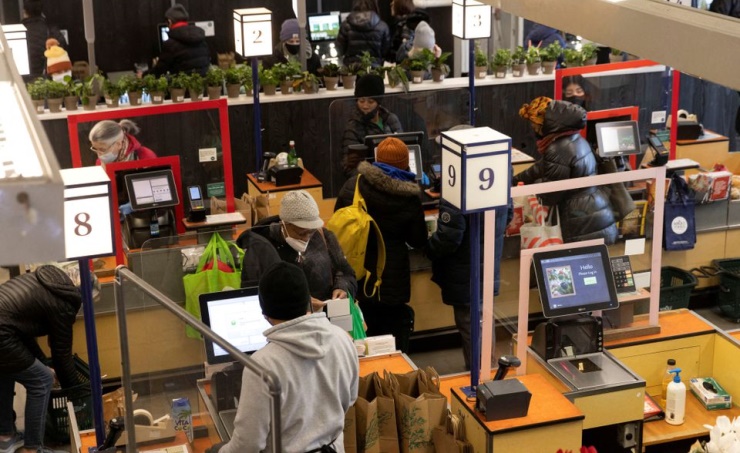 U.S. economic growth likely slowed sharply in the first quarter as a wave of COVID-19 cases curbed activity, but retained sufficient underlying strength to keep the expansion on track amid headwinds from soaring inflation and rising interest rates.

The growth rate, which is anticipated to be the slowest since the recession triggered by the pandemic ended nearly two years ago, would also reflect a surge in imports, Reuters reports.

Economists are split over whether inventories would contribute to gross domestic product growth after they accounted for the bulk of the acceleration in GDP in the fourth quarter.

The Commerce Department’s advance first-quarter GDP report on Thursday could lead to warnings of stagflation and recession from some quarters, but economists cautioned that a low growth number would not be a true picture of the economy, noting that other measures of output such as aggregate hours worked and industrial production showed sustained growth last quarter.

“We do have to remember the context of why it is slowing,” said James Knightley, chief international economist at ING in New York. “The Omicron wave, which did hit confidence and people’s movements, largely explains it. And now that we’ve come out the other side of it in reasonable shape, we should look forward to better growth for the second quarter.”

According to a Reuters survey of economists, GDP growth likely increased at a 1.1% annualized rate last quarter. That would be a big step down from the robust 6.9% pace logged in the fourth quarter. Estimates ranged from as low as a 1.4% rate of contraction to as high as a 2.6% growth pace.

The Federal Reserve is expected to hike interest rates by 50 basis points next Wednesday, and soon start trimming its asset holdings. The U.S. central bank raised its policy interest rate by 25 basis points in March, the first hike in more than three years, as part of its fight against inflation. Annual consumer prices increased in March at their quickest pace in 40 years.

But the GDP survey was conducted before the release on Wednesday of data showing a record goods trade deficit in March and continued increases in retail and wholesale inventories.

The jump in the goods trade deficit, driven by robust import growth, led Goldman Sachs to lower its first-quarter GDP estimate to a 1.3% rate from a 1.5% pace. Citigroup predicted the economy contracted at a 1.2% rate.

The imports surge, which economists attributed to front-loading by businesses fearful of shortages because of the Russia-Ukraine war, will cut into growth. It is, however, also a sign of strong domestic demand, and economists say that should be the main focus in the GDP report.

The wider trade deficit is believed to have chopped off as much as 1.5 percentage points from GDP growth last quarter. With local manufacturers lacking the capacity to meet the demand, imports are filling the gap. It would be the seventh straight quarter that trade subtracted from GDP growth.

Growth in consumer spending, which accounts for more than two-thirds of U.S. economic activity, is forecast to have picked up from the fourth quarter’s 2.5% pace, despite taking a hit from the winter wave of coronavirus cases, driven by the Omicron variant. Even with food and gasoline prices soaring, there is no sign yet of consumers pulling back.

Strong wage gains amid a tightening labor market and at least $2 trillion in excess savings accumulated during the pandemic are providing a cushion against inflation. According to data from Bank of America Securities, lower-income consumers, who tend to be disproportionately affected by inflation, were showing greater resilience.

“The lower-income consumer will likely remain resilient at least until the end of this year,” said Anna Zhou, a U.S. economist at Bank of America Securities in New York.

“But the path for next year and beyond is less certain. Should gasoline prices remain elevated for the foreseeable future, they will eventually bite into consumers’ purchasing power despite strong balance sheets.”

Solid growth is also anticipated in business spending on equipment. As a result, a measure of domestic demand – excluding trade, inventories and government spending – is forecast to have grown at nearly double the fourth-quarter pace of 2.6%. Final sales to private domestic purchasers account for roughly 85% of aggregate spending.

“This is consistent with solid underlying momentum in the economy despite any pullback from Omicron and the further surge in prices due to the war in Ukraine,” said Kevin Cummins, chief U.S. economist at NatWest Markets in Stamford, Connecticut.

Still, concerns remain that the Fed could aggressively tighten monetary policy and tip the economy into recession over the next 18 months. The housing market is already showing signs of slowing, with the 30-year fixed mortgage rate shooting above 5%.

But much would depend on how quickly geopolitical tensions and supply chains improve and whether inflation falls.

“Solid fundamentals and still-accommodative financial conditions should help support extension of the economic recovery,” said Sam Bullard, a senior economist at Wells Fargo in Charlotte, North Carolina. “Risks are no doubt on the rise from both global growth weakness and tighter financial conditions and need to be monitored closely.”