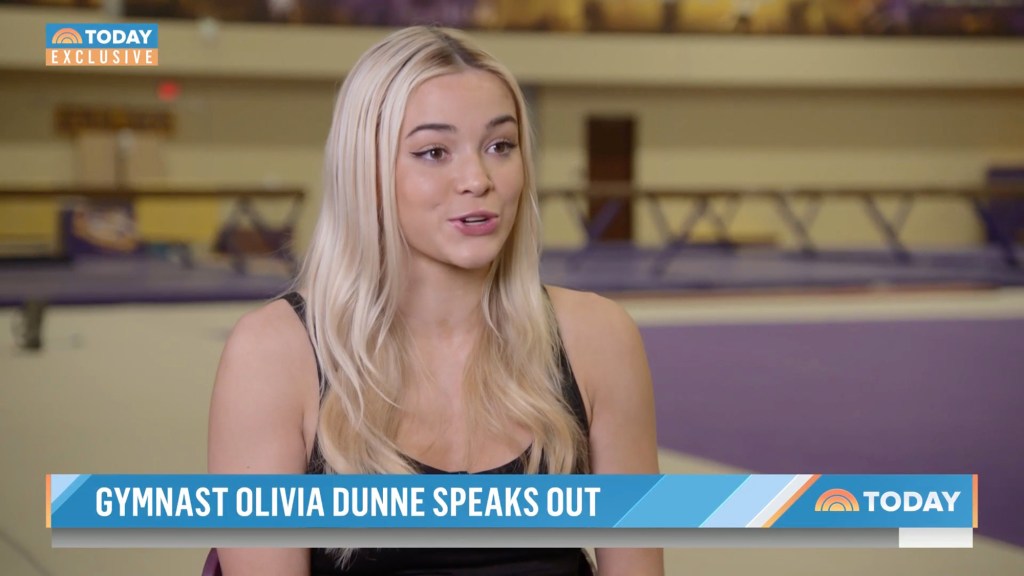 Olivia Dunne is still adjusting to the attention she receives, especially following a police-related event.

During an interview on “The Today Show” on Friday, a 20-year-old LSU gymnast voiced concern about individuals who reach out to her on social media and revealed that the school contacted the police regarding an incident that occurred last year.

Dunne did not provide any other information regarding the matter. The social media influencer has roughly 10 million followers across Instagram, Twitter, and TikTok, and earns seven figures from business endorsements while receiving no payment for his services.

Dunne stated: “As a woman, you are not responsible for how a man views you and objects to you. That is not the responsibility of women.”

Dunne told “Today” that threatening comments had been made in response to her enormous social media following.

Dunne stated, “There are a few people who occasionally reach out, which is somewhat concerning.”

The New Jersey native, a junior at LSU on a four-year athletic scholarship, made headlines earlier this month when a big crowd of yelling male supporters attended the Tigers’ season opener in Salt Lake City against Utah.

“In the past, some of my supporters have attended meets to watch and cheer for LSU, but it was ridiculous. The gymnast was in a walking boot while at the Tigers’ training facility, where Dunne made the statement. Due to an injury, she has missed the start of the season.

Former Olympic gymnast Samantha Peszek, who shared a video of Dunne’s admirers shouting her name, described the scene outside the Jon M. Huntsman Center in Salt Lake City as “so frightening and disturbing.”

There was a line of teenage lads inquiring about Dunne’s location, with some holding posters requesting photos and social media follows.

Dunne stated, “They gave us some new rules to keep us safe, such as not going into the stands after meets, and we have a new security person who travels with us.”

Following the LSU-Utah match, Dunne tweeted that fans should “respect the other gymnasts and the gymnastics community”

Dunne expressed “extreme gratitude” for earning seven figures as a college student. In October, she topped the list of female NIL moneymakers compiled by On3 Sports, which valued her worth at $2.3 million.

Dunne signed a representation contract with WME Sports in August 2021 and has endorsement partnerships with a variety of sponsors, such as Vuori apparel, College GameDay, GrubHub, Madden/EA Sports, and American Eagle.