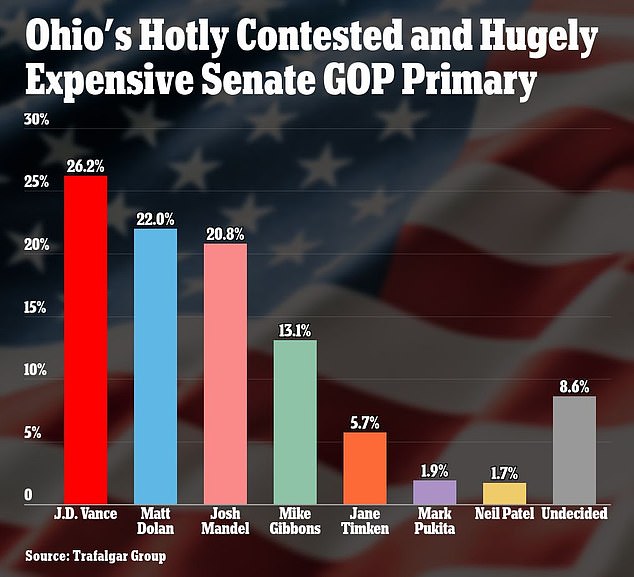 Voters are heading to the polls in Ohio Tuesday morning for the expensive and contentious primary election where it’s still anyone’s game to replace retiring GOP Senator Rob Portman.

Ohio’s Republican race will put former President Donald Trump‘s influence to the test after he backed a candidate many GOP voters in the state claim isn’t conservative enough – J.D. Vance.

The wide open race shows Vance in the lead with 26.2 percent of the vote, according to a Trafalgar Group poll released Monday. But competitor and state Senator Matt Dolan isn’t far behind with 22 percent and former state treasurer Josh Mandel earned 20 percent in the survey.

‘Polls open in about 10 minutes here in Ohio, and I just want to say thank you to everyone,’ Vance tweeted on Tuesday morning. ‘To the volunteers and early supporters, to my staff and the campaign team, to my family who allowed me to do this, and to the people of Ohio who will vote today. God bless you all!’

Author Vance is going up against six other candidates on the primary ballot, but his biggest competitors are Mandel, Dolan and banker Mike Gibbons. The remaining three candidates further behind in the polls are former Ohio Republican Party chair Jane Timken, businessmen Mark Pukita and Neil Patel.

Mandel, Vance, Gibbons, Timken and Dolan all feel within striking distance of victory after a huge number of voters said they are still undecided in the days leading up to Election Day in Ohio.

Candidates and interest groups as of Monday spent an unprecedented $66.2 million on television, cable and radio advertising in the GOP primary, which shattered the previous campaign spending record in the state.