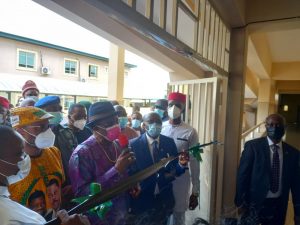 Government House Correspondent, Ejike Abana, reports that during the ceremony, the second phase of COVID-19 vaccination in Anambra State was also flagged off by the governor.

According to the Governor, the COVID-19 vaccine helps one’s immune system, adding that the “moderna” and “astrazeneca”, which the State now administers are harmless, urging people to be mindful of and observe all COVID-19 protocols, irrespective of whether they have taken the vaccines or not.

While recalling many interventions of his administration in the health sector, aimed at taking healthcare to the door steps of Ndi-Anambra, the Governor thanked Chevron, calling on others to emulate the gesture because of its immeasurable benefits.

In his remark, the State Commissioner for Health, Dr. Vincent Okpala, who pointed out that Governor Obiano has matched vision with action, thanked Chevron for the multimillion naira center, noting that the present administration is committed to making Anambra a medical tourism destination, having achieved regular financial support for Primary Healthcare facilities in the State, the State Health Insurance Agency, Oxygen plant, among others.

On his part, the Chief Medical Director of Chukwuemeka Odumegwu Ojukwu University Teaching Hospital, Dr. Joe Akabuike, recalled that the hospital, which started sixty-five years ago as a cottage Hospital, was handed over to Anambra State Government in 1985 and upgraded to a Specialist hospital in 1991, pointing out that in 2015, all necessary accreditations were secured and the first set of medical students graduated, having stayed ten years in school.

He revealed that the institution has recorded growth in infrastructure and human resources, including a one hundred and fifty bedded student’s hostel, accreditation for training of post graduate doctors in Obstetrics and Gynaecology, Pediatrics, Surgery and community medicine, among others, stressing that in line with the Governor’s call to make pregnancy and delivery safe, as well as protect the lives of new born, Chevron and their partners stepped in for women and children in Anambra State.

Dr. Akabuike added that the center is a State-of-the-art Hospital complex equipped with theater, laboratory, pharmacy and needed pregnancy care delivery, promising that the facility will be fully utilized to serve its purpose.

Donating the facility on behalf of Chevron, Mr Seyi Orenuga noted that the project, which was started late 2018, is meant to cater for mother and child as a referral center.

Speaking to ABS, the Managing Director and Chief Executive Officer of one of a major suppliers of Hospital equipments, Dr. Foster Ihejiofor, said Governor Obiano has delivered on equipping health facilities in the State, unlike what he met on assumption of office.

The event attracted dignitaries, including members of the State Executive Council, political appointees, Traditional rulers, among others.

From the ceremony, Governor Obiano embarked on inspection visit to the Anambra International Conference Center, Awka, where he was received by the Commissioner for Housing, Architect Michael Okonkwo and the Contractor, Mr. Mark Tu.