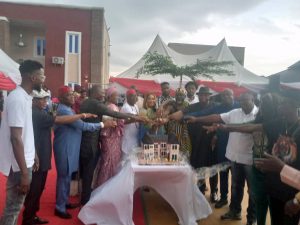 Commissioning the hotel, Governor Willie Obiano represented by the state Commissioner for Housing, Architect Michael Okonkwo noted that his administration has created enabling environment for businesses to thrive in the state through provision of effective security network, and commended Chief Egbunna for bringing his wealth home to assist his government in provision of employment opportunities for the teeming youths.

The Governor however called on wealthy Ndi Anambra in the diaspora that are yet to answer the Akulue-Uno call to do so in order to boost the state’s internally generated revenue for massive development of the state.

On his part, the Commissioner for Commerce, Industry and Wealth Creation, Mr Uchenna Okafor commended Governor Willie Obiano for transforming the socioeconomic life of the state and noted that the hotel will go a long way in reducing unemployment among youths, as according to him, government alone cannot provide employment for all.

In his remark, the owner of the hotel, Chief Chinedu Egbunna pointed out that his bold step to erect the hotel in Anambra state was in response to Governor Willie Obiano’s Aku lue-Uno call, calling for patronage from both Ndi Anambra and Anambra state government, and assured that the staff and management are always ready to render unique services to their customers.

The commissioning of the hotel attracted men and women of goodwill, as well as government officials in Anambra state, among whom were the State Head of Service, Barrister Harry Uduh, Commissioner for Diaspora Affairs, Culture and Tourism, Dr Kenneth Anierobi represented by Deputy Director, Hotel and Hospitality in the Ministry, Lady Stella Okeke-Bob, President Chinmark Groups, Engineer Marksman Ijiomah, among others.