Anambra State Governor, Chief Willie Obiano, has commiserated with the Auxiliary Bishop of Awka Diocese, Most Reverend Dr Jonas-Okoye and family over the loss of his brother, late Paul Okoye.

A burial mass celebrated in honour of the deceased by the Catholic Bishop of Awka Diocese, Most Reverend Dr Paulinus Ezeokafor was held at St Andrews Catholic Church, Adazi-Nnukwu.

Government House Correspondent, Ejike Abana reports that while commiserating with the family, Governor Obiano assured ndi Anambra that his administration has Strengthened  the security apparatus of the State. 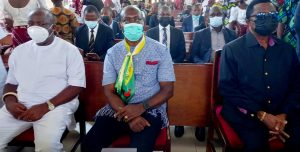 The Governor, who appreciated the people of Adazi-Nnukwu in particular and Ndi Anambra in general for supporting him over the years, called on Ndi Anambra to come out and exercise their franchise come November sixth, and identified Professor Chukwuma Soludo as the candidate with the required pedigree to succeed him and consolidate on his achievements, adding that he is proud of the much he has been able to achieve in office with available resources.

In a Sermon, the Catholic Bishop of Ekwulobia Diocese, Most Reverend Dr Peter Okpalaeke, recalled his knowledge of the late Peter as a hardworking man and lover of God and humanity.

While urging the congregation to always prepare for inevitable challenges, Most Reverend Dr Okpalaeke appealed to people who are involved in various acts of violence in the State to desist, just as he called on everyone to work and pray for free and fair election in the State.

Speaking on behalf of the family, Bishop Okoye appreciated everyone who came to commiserate with them in their time of bereavement, asking God to bless all.