A special Pontifical High Mass has been held in honour of Nze Simeon Nwankwo Soludo as he marked his ninetieth birthday anniversary.

Nze Soludo, whose title name is Akukananwa is the father of the Anambra State Governor-Elect, Professor Chukwuma Soludo.

Correspondent Valentine Mbadugha reports that the thanksgiving Mass, which heralded the anniversary, was presided over by the Bishop of Ekwulobia Diocese, Most Reverend Peter Okpalaeke.

Although it was a family celebration with few associates and friends of Nze Soludo, dignitaries like the Deputy Governor-elect, Dr Onyekachukwu Ibezim, the Secretary to Anambra State Government, Professor Solo Chukwulobelu, the transition committee chairman of Aguata Local Government Area, Mr. Eche Ezibe, Prince Neville Uchendu, traditional rulers and the clergy among others from within and outside the state, graced the occasion.

The Governor-elect, Professor Soludo in his remark thanked God for the opportunity given to his father and prayed that he lives up to a century, in good health and sound mind. 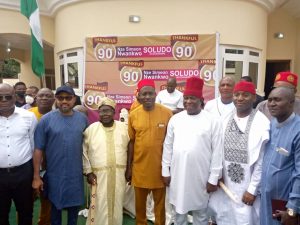 The patriarch, Nze Soludo while thanking God for his grace and love upon his life, prayed God to bless those that came to celebrate with him.

Some guests at the occasion, including the former chairman of the All- Progressives Grand Alliance, APGA, Senator Victor Umeh, the member representing Anaocha, Njikoka and Dunukofia Federal Constituency, Honourable Dozie Nwankwo, the member representing Aguata Constituency Two at the state House of Assembly, Honourable Okechukwu Okoye, the immediate past Deputy Governor of Anambra State, Mr. Emeka Sibudu, the state Commissioner for Public Utilities, Engineer Emeka Ezenwanne, agreed that the contributions of the elderly towards the growth and development of every society cannot be overemphasized. 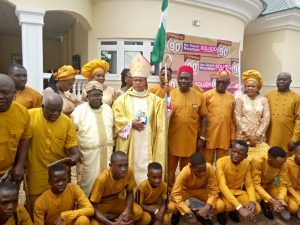 The celebrant, who is the oldest living member of the Boys Scout Movement, has twenty-five grandchildren and five great-grandchildren.

The Boys Scout Movement at the occasion presented him with a certificate of wood badge, which signifies that he has attained the highest rank in the organization and also gave the patriarch a special salute. 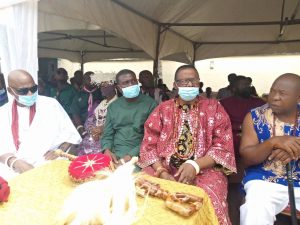 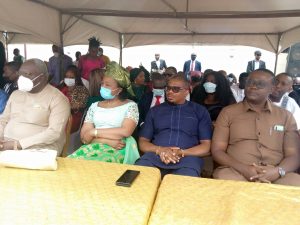