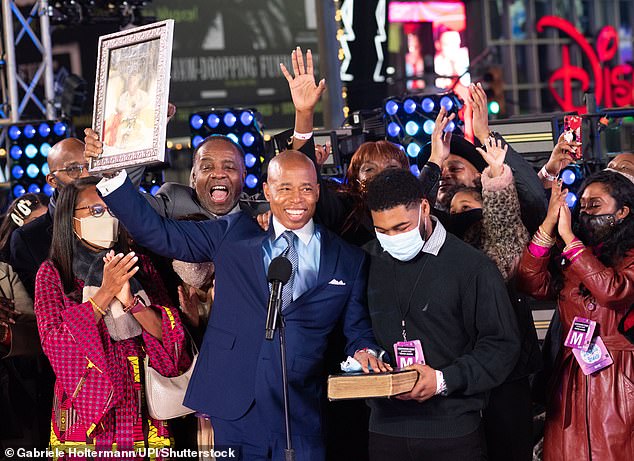 A retired police inspector who is a close confidant of New York City Mayor Eric Adams is one of the city’s highest-paid employees, receiving more than $242,000 annually.

Adams added Timothy Pearson to the payroll of the city’s economic development company on May 31, while he maintained his position as security director at the city’s sole casino.

Adams has previously declined to publish Pearson’s municipal salary, which is generally public information, but according to numbers acquired by the New York Times, he earns only a few hundred dollars less than the corporation’s CEO.

According to the organization’s statistics, the chief operational officer, Melissa Burch, who has nearly 20 years of experience, makes $212,000.

According to public records, Timothy Pearson earns $242,600 a year, making him one of the highest-paid city employees.

Pearson (second from the left) retired from the New York Police Department in 2011 and was Adams’ closest colleague during their time there.

Pearson, who had retired from the New York Police Department in 2011, was discovered working for the city, a private gaming operator, and collecting his police pension in August.

State law prohibits city officials from receiving both a city salary and a city pension at the same time.

Pearson, however, was able to collect both his salary and his $124,000 annual Police Department pension since he is on the payroll of the mayor-controlled development corporation.

The mayor’s spokeswoman, Fabien Levy, told the New York Times that Pearson’s decades of experience in public safety “made him exceptionally equipped” for his current position.

His tasks include working with law enforcement, advising the mayor on Covid recovery, interacting with the business community, and devising a strategy to keep local schools running, according to city authorities.

Adams’ hiring tactics have been criticized by government watchdog groups, with John Kaehny, executive director of Reinvent Albany, a good-government organization, describing his conduct as a’mockery.’

He remarked, “The mayor is making a mockery of hiring based on professional qualifications and experience.”

This constitutes favoritism and cronyism, which weakens the professionalism of city government.

Government watchdog groups have criticized Adams’ employment methods, with some calling it a “mockery.”

In August, it was discovered that Pearson was working for the city, a private gaming company, and earning his police pension at the same time.

Employer of the now-defunct Resorts World Casino is competing for one of three newly available, full-scale casino licenses.

Pearson served alongside the mayor on the police force and is one of Adams’ closest confidants.

The former employer of Resorts World Casino is now competing for one of three newly available full-scale casino licenses, which would allow it to transition from electronic games to full-service casino.

The New York Times received paperwork that included a handwritten request by Pearson to hold a second job. The request was dated June 1, the day after he started working for the city.

The Economic Development Corporation granted Pearson’s request on July 28 with the stipulation that he not use city time or resources for his casino job and not share secret information.

Pearson estimated that he earned $100 per hour at the casino and stated that he would work there largely on nights and weekends.

He did not specify whether he was paid on an hourly or annual basis.