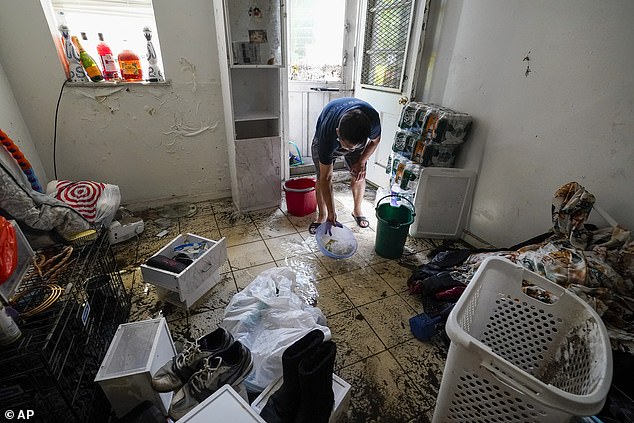 After the storm of 2021 swamped New York’s sewer infrastructure, City Comptroller Brad Lander denied all 4,703 claims submitted by the city for reimbursement for property damage caused by flooding.

Last September, the hurricane blasted through New York City, dumping nine inches of rain in some areas and claiming thirteen lives.
Some victims were trapped in basement apartments that turned into water-filled tombs when the municipal sewer system was overwhelmed by the downpour.

Officials from the city and state confessed at the time that they were taken off guard by the flood and delayed providing storm warnings.
Amrita Bhagwandin, age 52, was among the comparatively fortunate. According to The City, a local online news source, Ida’s flat in Hollis, Queens, was only partially flooded, inflicting $125,000 in damage.

A mother and her son, two of her neighbors, perished in the storm.

She stated that the home’s foundation was compromised and that the wiring and plumbing must be totally rebuilt.

She told The City, “I’m at my wit’s end trying to find a contractor with a reasonable price because everything will cost me more than $125,000.”

According to the publication, she received her rejection letter on Monday, informing her that her problem is not New York City’s problem.

Lander said in his letter denying her claim, “We regret to inform you that, based on New York State law and the facts of the storm, the City of New York is not legally responsible for the damage to your property that occurred when Hurricane Ida slammed New York City on September 1, 2021.”

Courts have held for more than a century that municipalities in the state of New York, including the city of New York, are not liable for damages caused by “exceptional and excessive rainfall.”

Lander noted that there is an exemption if the damage was caused by “negligent action or omission” on the part of the local authority.

However, he instantly rejects the likelihood that it occurred during the storm.

That was not the case in this instance, Lander writes.

Bhagwandin and other New Yorkers in her situation have no choice but to engage an attorney and sue the city.

The clock is running out on that. State law in New York stipulates that claims against the city must be brought between one year and ninety days of the incident.

This implies that victims of Hurricane Ida have until November 30 of this year to file a lawsuit.

42-year-old Tara Ramskriet and her 22-year-old son Nicholas, who lived across the street from Bhagwandin, perished in their flooded basement apartment.

According to Ramskriet’s other surviving son, the flood waters were so forceful that his father, Dameshwar, was washed off his feet, as reported by The New York Times.

The father attempted to cling on to his wife, but she was also swept away by the intense downpour.

There could have been a valid explanation for why the Ramskriets were unprepared for the flood.

On the evening Ida struck, the city did not warn citizens of the impending storm until 7:20 p.m.

As the rainfall crested just before 9 p.m., flash flood warnings were issued for the following hour and a half, but the city did not issue the Flash Flood Emergency alert until 10:25 p.m.

As hurricane season approaches again, Bhagwandin is scared about the next storm.

Hochul stated, “We had no idea that between 8:50 and 9:50 p.m. yesterday night, the skies would literally open and bring Niagara Falls-level flooding to the streets of New York.”

De Blasio reported receiving a forecast for 3 to 6 inches of precipitation on Wednesday.

The majority of the damage occurred in the borough of Queens Borough President Donovan Richards, who pushed his residents to suit.

In a statement to THE CITY, he added, “This decision — about which I encourage residents to investigate their alternatives — is a terrible illustration of the city’s incompetence and utter lack of readiness for catastrophic weather.” In the Northeast, 46 individuals perished, including 23 in New Jersey alone.

In his denial letter, Lander noted that the city’s Department of Environmental Protection recorded between four and nine inches of precipitation during the storm’s nighttime peak. In Central Park, more than 3.15 inches of rain poured in a single hour, breaking the record for the highest rainfall ever recorded in a single hour in New York City.

Metodija Mihajlov, whose Manhattan restaurant’s basement was flooded with three inches of water, remarked, “I’m fifty years old and I’ve never seen that much rain in my life.”

It was comparable to living in the forest, with tropical rainfall. Unbelievable. This year, everything is so odd,’ he told AFP. In another section of Queens, Deborah Torres’ first-floor apartment quickly flooded up to her knees while her landlord hurriedly begged her neighbors, including a baby, to evacuate, she said.

She deduced that they were unable to open the door due to the force of the water’s entry. Three residents perished.

“I am speechless,” she remarked. “How could something like this occur?”

As their first-floor apartment flooded, Sophy Liu, also of Queens, awakened her kid from bed and dressed him in a life jacket and inflatable swimming ring.

Incapable of opening the door against the force of the water, she called for assistance from her pals. She stated that the water was about 1.5 meters deep when they came to her rescue.

‘I was obviously terrified, but I had to be brave for the sake of my son. I had to calm him down,’ she recounted as medical examiners removed three remains from a residence down the street on Thursday.

Lander expressed sympathy for the storm victims and attributed the disaster to global warming.

In his denial letter, he stated, “As climate change increases the intensity and frequency of local storms, New York City must do more to prepare our citizens.”

He proposed that the city establish a “Disaster Recovery Center” to give legal aid, information about relief programs, and support with insurance claims.

He stated, “I regret that such a facility did not exist in the aftermath of Hurricane Ida.” ‘Hopefully, by establishing such a facility, future New Yorkers affected by natural disasters would be assisted (regardless of whether or not the City is liable for damage).