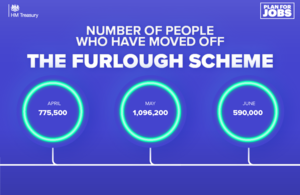 Almost three million people have moved off the furlough scheme since March as the economy began to bounce back and businesses reopened, according to new statistics.

Figures published today which cover up until the end of June, show the fewest number of people on furlough since the scheme launched in March 2020, down from a peak of nearly nine million at the height of the pandemic in May last year.

1.9 million people remained on the scheme by the end of June, more than half a million fewer than the 2.4 million at the end of May.

Today’s ONS Business Insights and Conditions Survey (BICS) shows numbers may have fallen even further – with estimates that between 1.1 and 1.6 million people are still on furlough.

It comes as the Chancellor visited Scotland where he has hailed the economic strength of the union and where the Government’s Plan for Jobs has supported businesses and families during the pandemic.

Ahead of meeting Scottish businesses and individuals in Edinburgh, Glasgow and Fife, where he will be talking to employees who have returned from furlough, Rishi Sunak welcomed the statistics.

It’s fantastic to see businesses across the UK open, employees returning to work and the numbers of furloughed jobs falling to their lowest levels since the scheme began.

I’m proud our Plan for Jobs is working and our support will continue in the months ahead.

The figures also show a striking fall in the number of young people on furlough, who for the first time ever, no longer have the highest take-up of the scheme.

In the last three months, younger people have moved off the scheme twice as fast as all other age brackets, with almost 600,000 under 25s moving off the scheme.

This decline means those in hospitality and retail no longer make up the majority of all those on furlough. Furlough was extended until the end of September to allow for businesses to adjust beyond the end of the roadmap and to bring people back to work.


Starting on 1st August, the employer contribution to furlough costs will increase to 20% and that contribution level will continue until the scheme ends at the end of September.

The Government’s Plan for Jobs continues and is still in place to provide support, including Kickstart, traineeships and more work coaches to help people find jobs.

This is the right thing to do to reduce long term economic scarring in the labour market and our ongoing Plan for Jobs means that we will continue to support people as the economy recovers.