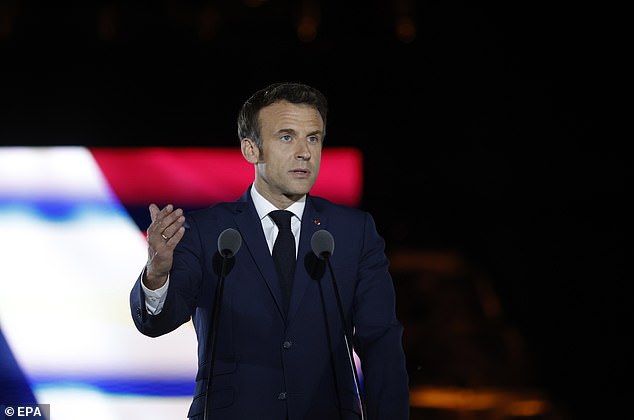 Boris Johnson will push prickly French president Emmanuel Macron for a new ‘entente cordial’ to deal with flashpoints over Brexit and the scale of cross-Channel migration after he won a second term.

Mr Macron, 44, clashed with the Prime Minister in recent months, chilling relations between Downing Street and the Elysee, as he sought to see off hard-right challenger Marine Le Pen.

There have been stand-offs over fishing rights and also the way French authorities have failed to stem the tide of small boat crossings, despite taking millions of pounds off the UK Government.

The Macron administration was seen as talking tough to limit the impact of Le Pen, who comes from an anti-EU, anti-migrant background.

But Downing Street hopes that a new era of co-operation can now be launched.  Provisional forecasts from the presidential run-off suggested Mr Macron was on course for a thumping victory over his far-Right rival Marine Le Pen by a margin of 58 per cent to 42 per cent.

If the results are confirmed today, he will become the first French president to be re-elected for 20 years.

Ministers hope that victory for the prickly 44-year-old will trigger an end to the relentless ‘Brit-bashing’ of his campaign and open the door to a new deal on stemming the flow of illegal migration across the Channel.

‘Hopefully now his electioneering is out the way we can come together around the table and look at sensible solutions to solve what is a shared problem,’ a Government source said.

The Prime Minister’s official spokesman acknowledged there were differences over issues such as stemming the flow of migrants crossing the Channel but said that should not detract from the overall relationship.

‘We have always enjoyed a good relationship. As the Prime Minister said over the weekend, France is one of our closest and most important allies. We will continue to discuss with them some of the key issues – the shared issues that we have,’ the spokesman said.

‘At the moment we are focused on seeking to resolve some of these bilateral issues, be it the Channel crossings, some of the issues around the Northern Ireland Protocol, and other issues.

‘None of that should detract from the close relationship between the UK and France which has endured.’

Mr Johnson congratulated Mr Macron within an hour of the polls closing. He said: ‘France is one of our closest and most important allies. I look forward to continuing to work together on the issues which matter most to our two countries and to the world.’

Thousands cheered in front of the Eiffel Tower after preliminary exit polls projected Mr Macron had won a second term in office with a crushing 58.2 per cent of the vote.

The crowd, mostly young people, danced to Daft Punk’s dance tune One More Time while waving French and European Union flags, sending a powerful message that the country was set to continue on its path as a pro-European nation.

With Beethoven’s Ode to Joy playing in the background, Mr Macron entered the Champ de Mars hand in hand with his wife Brigitte as supporters chanted ‘Macron President’.

In an ambitious victory speech, Mr Macron said: ‘From now on I am no longer the candidate for a party. I’m everyone’s president.’ He conceded France was ‘full of anger and division’, but pledged: ‘Nobody will be left by the wayside.’ Wearing his trademark blue suit and tie, he continued: ‘I know a lot of people voted for me tonight, not because of my ideals, but to block the far-Right.

‘I have been entrusted with their sense of duty for the next five years.’

The result was also greeted with relief in UK Government circles, where there was concern about Miss Le Pen’s policies, which included opposition to Nato.

Miss Le Pen halved Mr Macron’s 2017 margin of victory, when she was thrashed by 66 to 34 per cent, but in the end her bid to soften her party’s image and woo working-class voters facing economic hardship was not convincing enough.

Others were put off by accusations of racism and her ties to Russian president Vladimir Putin.

But Miss Le Pen’s achievement in securing 42 per cent of the vote for a far-Right agenda will start a fresh round of soul-searching in France’s political establishment.

TUESDAY: ‘Migrants’ arriving at Dover after a small boat incident

And even with his big win, analysts say Mr Macron still faces an uphill battle, with many voters viewing him as elitist and backing him only as the lesser of two evils.

As the election campaign ramped up in recent months, French ministers have attacked Britain over the migrant crisis, saying lax labour laws are attracting migrants, with president Macron reportedly dismissing the PM as a ‘clown’ after talks on the issue.

Mr Macron has also repeatedly criticised Brexit as he campaigned against Miss Le Pen’s Eurosceptic party. Tory Party chairman Oliver Dowden yesterday played down the attacks as electioneering and suggested a post-election reset of the relationship was possible.

‘I’m sure you don’t lose votes in France by bashing the Brits and bashing the British Prime Minister, particularly one who has delivered Brexit successfully in the United Kingdom,’ he said. But he stressed the need to bring the migrant crisis in the Channel under control. ‘If we don’t take action on this then it’s going to get much worse,’ he told Sky News.

A Whitehall source said French efforts to stop migrants crossing illegally were ‘patchy’, adding: ‘Some days they can be quite effective in stopping the boats, other days they just seem to look the other way. We are giving them a lot of money and we need a lot more consistency.’

Home Secretary Priti Patel is set to seek talks on the migrant crisis as soon as Mr Macron appoints a new interior minister.

She is expected to revive an offer to supply Border Force or British security staff for joint patrols on French beaches. Miss Patel will also ask Mr Macron to reconsider opposition to the idea of taking back migrants who cross illegally.

Former Home Office minister Sir John Hayes told the Mail: ‘Now the elections are out the way there should be a good chance of resetting the relationship with France and getting them to take their responsibilities seriously.’

In an interview with Eamonn Holmes and Isabel Webster on GB News this morning the right-winger said: ‘He loathes us.

‘He’s an EU fanatic and he’ll never forgive us for Brexit, and we can expect more obstructionism.’

But quelle horreur! He thinks Boris is the devil incarnate

As a French woman who cannot stand Macron and despises Le Pen, I’m staying away from the news. It’s a nightmare. I’ll cry when I vote Macron,’ said Nana yesterday, one of millions of voters preparing to cast her ballot for Emmanuel Macron in the French presidential election.

This is how Macron was re-elected president of France on Sunday. By voters holding their noses.

The result was confirmed as the polls closed. The polling companies were unanimously forecasting a Macron win of between 54 and 58 per cent of the votes.

A convincing victory and one which marks the end of Marine Le Pen. This has been her third failed attempt at the presidency.