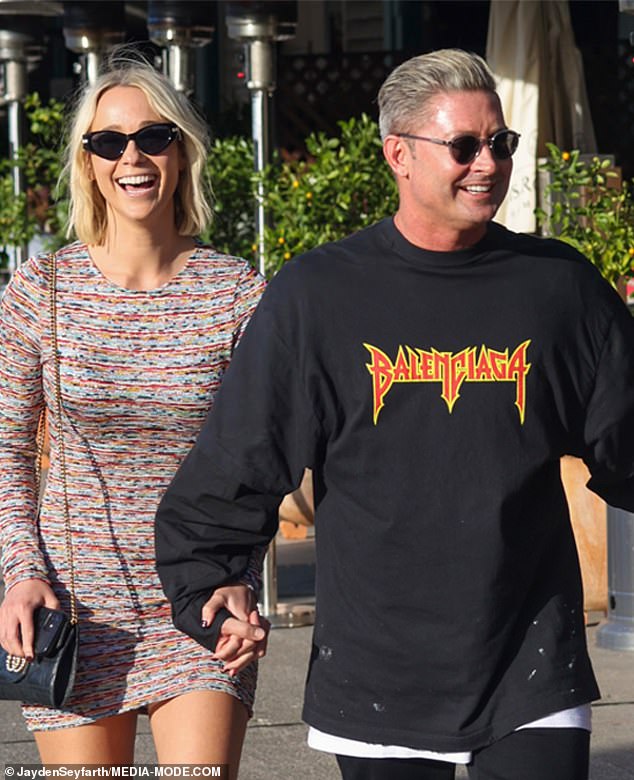 The cook who served Michael Clarke and Jade Yarbrough at his Italian restaurant before their nasty altercation in Noosa has said that the two were perfectly civilized.

Andrea Ravezzani, the chef and proprietor of Noosa Waterfront Restaurant in Noosaville, stated that the celebrity couple and their other dinner guests Jasmine and Karl Stefanovic “were fine” and eating his prawns before to the 9.30 p.m. melee.

In addition, a fresh timetable for the now-famous altercation has emerged, with Mr. Ravezzani asserting that they dined at his restaurant on a Friday evening.

Daily Mail Australia has independently established that the couple dined on a Friday, perhaps January 13, following issues between the former Australian cricket captain and Ms Yarbrough arose many days prior.

Mr. Ravezzani told FM Radio Hot 91 on the Sunshine Coast, “They were there for dinner on Friday night, but they didn’t fight over the prawns or anything,” and claimed the restaurant was unaware of the subsequent brawl at the adjoining BBQ area.

Andrea Ravezzani, the chef and owner of the Noosa Waterfront restaurant where Jasmine Yarbrough and Michael Clarke dined prior to their violent altercation, has stated that both were in wonderful health during their meal.

Andrea Ravezzani (above, with wife and marketing manager Kerri Ravezzani) stated that he served Clarke and Yarbourgh who ‘were good’ during a prawn dinner at their Noosa Waterfront restaurant before traveling to neighboring Lyons Park where the brawl broke out.

Along with Karl and Jasmine Stefanovic, the feuding pair appeared ‘fine’ as they dined on prawns at the one chef hatted restaurant renowned for its classic Italian cuisine.

When asked by radio hosts Sam Coward and Ash Gierke if ‘they were fine after they left you and then everything went pear-shaped,’ he agreed and stated that he only learnt about the incident when European friends gave him a screenshot of it.

Mr. Ravenazzi, whose restaurant menu includes a Fritto Misto variety of crab, shrimp, calamari, and whitebait, stated, “We know nothing about it.”

A local of Noosaville stated that the location where the altercation occurred, in which Karl Stefanovic and his wife Jasmine were involved, was normally vacant after 9pm, but ‘it being school holidays’.

Despite rumors that the now-infamous altercation occurred on Tuesday, January 10, the restaurant was closed on that night, and other individuals, including Mr. Ravezzani, have confirmed the incident occurred on Friday.

Images depict the Stefanovics, Clarke, and Ms. Yarbrough enjoying themselves on the beach on Saturday, January 7, prior to the emergence of tensions the following day.

Tension between Jade Yarbrough and Michael Clarke on January 8, a day after they appeared to be enjoying themselves on Noosa’s main beach.

Sunday, January 8th, video emerged of the couple engaging in tense talks at the Noosa property of celebrity accountant Anthony Bell, where they had been staying.

In the video, Clarke can be seen waving his hands at Jade as she turns her back on him and plainly rejects his effort to touch her hand.

Clarke was seen departing on Sunday with his daughter Kelsey Lee, who was left off at Burleigh Heads to be with her mother, Kyly Boldy, Clarke’s ex-wife.

Clarke is thought to have then gone to Sydney and flown back to Noosa later in the week before the dramatic brawl occurred at the Noosa Waterfront after supper.

Clarke, shirtless and suffering from a hamstring injury, lashes out at Karl Stefanovic in Lyons Park, Noosaville, in front of the barbeque

The dramatic footage obtained by The Daily Telegraph depicts Clarke being yelled at and slapped in the face by a distraught Jade, while the Stefanovics attempt to contain the situation.

“You are blatantly lying to me. You are complete garbage. I just chatted to her. What is your problem?’ Ms. Yarbrough screams at Clarke about her assumption that he slept with his ex-girlfriend, designer Pip Edwards.

Clarke says, “It’s not true, it’s not true,” and Jasmine Stefanovic eventually intervenes, grabbing her distressed sister by the arm.

Clarke then throws his rage on Karl Stefanovic, telling the Today show presenter, “Karlos, I can tell you now, scumbag, don’t you f**king walk away.” She can, she can punch me, but you are a scumbag.

The Queensland Police have been notified and are conducting an investigation.

Kerri Ravezzani declined additional comment on the night in question, stating that “the privacy of our guests is of the utmost importance.”

Michael Clarke (seen above with daughter Kelsey and girlfriend Jade Yarbrough) reportedly took the six-year-old from Noosa to be with her mother Kyly Boldy in Burleigh Heads after tensions arose with his girlfriend.