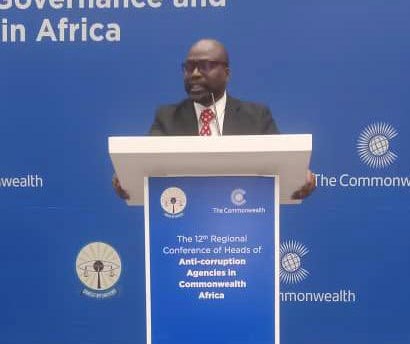 The Chairman Nigeria’s Anti-graft Agency, the Independent Corrupt Practices and Other Related Offences Commission (ICPC), Prof. Bolaji Owasanoye, SAN, has underscored the benefits of non-conviction-based asset recovery in the fight against corruption, citing it as a potent tool for the recovery of illicit wealth.

The ICPC boss made this known at the ongoing 12th Commonwealth Regional Conference for Heads of Anti-Corruption Agencies in Africa at Kigali, Rwanda.

ICPC Boss Backs Non-Conviction Based Asset Recovery in Fight against Corruption
The Chairman of the Independent Corrupt Practices and Other Related Offences Commission (ICPC), Prof. Bolaji Owasanoye, SAN, has underscored the benefits of non-conviction-based asset recovery in the pic.twitter.com/gz1bPcVa7d

The theme of the Conference is “Combating Corruption for Good Governance and Sustainable Development in Africa.”
According to the ICPC boss, non-conviction-based asset forfeiture would deny corrupt persons the use of whatever they had stolen from the public coffers.

Speaking on “the Effects of Non-Conviction Based Asset Recovery in Fighting Corruption,” Professor Owasanoye, advised that civil forfeiture was a viable alternative to criminal forfeiture.

He noted that the Anti-Corruption Agencies (ACAs) must improve capacity in investigation especially asset tracing to ensure maximum impact of non-conviction based asset forfeiture.

Prof. Owasanoye said: “Serious efforts should be made to address the dysfunction in the criminal justice system while improved public education is required on the utility of civil forfeiture to anti-corruption efforts.”
Benefits of non conviction:

He highlighted the benefits of the non-conviction based asset forfeiture to include: conclusion of proceedings within a short period; liberty of the person in possession of assets not as issue as it does not offend fundamental rights or constitutional safeguards; and the proceeding being against property and not the person.

The ICPC Chairman also added that dispossessing criminals from their ill-gotten wealth was sufficient punishment to dissuade others and is recognised and encouraged by the United Nations Convention Against Corruption (UNCAC).

Prof. Owasanoye identified the limitations of asset recovery in the fight against corruption as “muting the utility of non-conviction based asset recovery where the offender remains in public office to accumulate other illicit assets; retention of other assets undermines public confidence where all illicit assets are not traced, and non-conviction based asset recovery without imprisonment is perceived by the public as not full deterrent of wrongful conduct.”
Africa to take position

He articulated three actions that should be taken by the member-countries of African Union in the fight against corruption, particularly asset recovery.

” The actions include implementing the Common African Position on Asset Recover (CAPAR) standards; implementing the recommendations of the Thabo Mbeki Report, and advocating a model template for International Asset Return.

“The African Union Heads of Government need to implement the low hanging fruits of the Mbeki Panel Recommendations viz – establishing specialized asset forfeiture/recovery units locally and within AU structure by providing required information in compliance with AU Executive Council Decision and designating a national authority and criminalizing acts of corruption.”

The ICPC Boss said that, African Union Heads of Government need to combine diplomatic, civil and criminal forfeiture mechanisms for asset recovery and not just diplomatic measures as well as establish transparent mechanisms for management and use of returned assets.