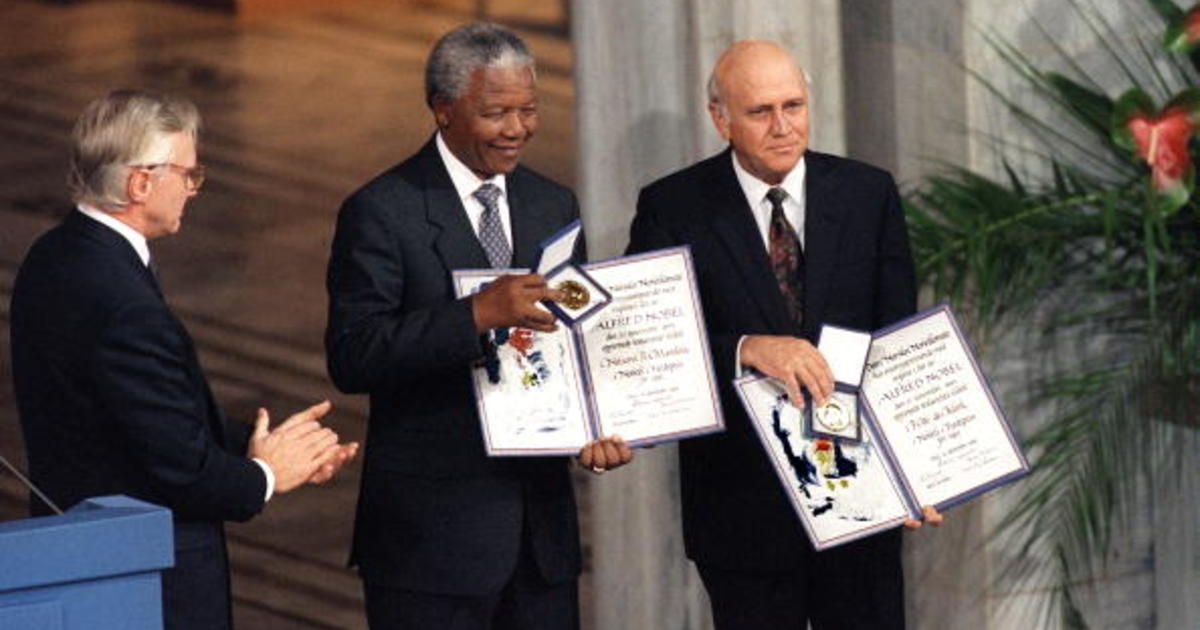 Nelson Mandela, President of the South African National Congress (C), and FW de Klerk, President of South Africa, hold their Nobel Peace Prizes in Oslo, Norway, on December 9, 1993, after being jointly given the medal for their efforts to end apartheid peacefully. GERARD JULIEN/AFP/Getty

Johannesburg — The Nobel Peace Prize medal handed to FW de Klerk, the final president of apartheid-era South Africa, was taken from his Cape Town residence six months ago, according to a statement released by his foundation on Wednesday. He was awarded the Nobel Peace Prize in 1993, alongside Nelson Mandela, for his contribution in bringing democracy to South Africa.

In April, the 18-carat medal made of recycled gold was stolen from his residence during a break-in.

“I can confirm that FW de Klerk’s Nobel Peace Prize was taken earlier this year from his residence,” Brenda Steyn, the foundation’s legacy manager, told AFP.

The former president died of cancer in November of last year at the age of 85.

Mandela and De Klerk received the renowned laurel in Oslo “for their work toward the peaceful end of the apartheid regime and for building the groundwork for a future democratic South Africa.”

How South Africa has dealt with its racist past 05:41

After releasing Mandela from jail in 1990, De Klerk led South Africa’s transition from white minority rule to its first multiracial elections in 1994.

Steyn stated that De Klerk’s widow, Elita Georgiades, believes a former housekeeper who worked for the family for seven years was responsible for the crime.

The theft was reported to police in Cape Town.