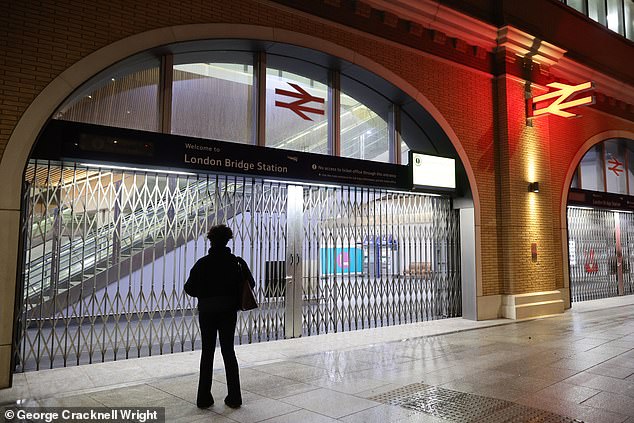 Today, a series of strikes interrupted the first day back at the office, with some commuters rejoicing that they did not have to get up early for work.

On Tuesday, more than 100 road traffic officers and control room operators employed by National Highways throughout England are also on strike for 48 hours.

The disruption to travel, which is detrimental to the economy, was applauded by commuters who appreciated the opportunity to work from home and stay in bed.

London Bridge Station is closed because RMT union members are participating in strikes.

This morning, the Blackwall Tunnel is clogged with commuters who are not working from home.

There were widespread celebrations among commuters whose employers suddenly permitted them to work from home.

One person exclaimed, “I’m so thrilled it’s train strikes and I’m going to WFH tomorrow; I’m not ready for my 6 a.m. alarm!”

Another remarked, “WFH and it’s a strike day, so technically it’s a day off.”

It comes a day after it was warned that prolonged train strikes will permanently deter an entire generation of passengers from traveling by train.

The trips of millions of passengers will be disrupted this week as a result of a conspiracy by militant train unions to cause the worst disruption in thirty years.

Mr. Lynch accused officials for obstructing a potential agreement between businesses and his union, which has rejected a 9 percent wage increase over two years.

Mick Lynch has stated that he does not want disruptions on the railroads in advance of two 48-hour walkouts by his members, during which just one out of every five trains will operate.

Union leader asserts that the strikes will continue indefinitely.

Despite Rishi Sunak’s desire to speed through new anti-strike rules this year, a union leader insists that walkouts will continue.

Dave Penman, general secretary of the FDA, which represents senior civil workers, anticipated coordinated strike action across the public sector in the near future.

Mr. Penman told Times Radio that, in essence, these disputes are over wages.

And if you don’t address that, if the government doesn’t try to resolve it, they may be able to limit the impact of some of these strikes, but they will continue.

The recommendation is to only go if absolutely essential, to leave extra time, and to verify the departure times of the first and last trains.

As the striking workers return to their tasks on Sunday, additional service disruptions may occur.

On days of RMT strike, almost half of the network will be shut down, with only 20% of typical services operating.

On the day of the strike, trains that do operate will begin later and end much sooner than usual, with services typically operating between 7.30 a.m. and 6.30 p.m.

The train drivers’ strike on Thursday will impact fifteen operators and result in even fewer trains, with some companies implementing ‘very curtailed’ timetables.

Daniel Mann, director of industry operations for the Rail Delivery Group, stated, ‘No one wants to see these strikes go through, and we can only apologise to travellers and the numerous businesses who will be negatively impacted by this needless and damaging disruption.

“We advise travellers to only travel during this period if absolutely necessary, to allow extra time, and to verify when their first and last trains will depart. Passengers with tickets for travel between 3-7 January may use their tickets one day before to the ticket date, or until Tuesday, 10 January.

The prolonged train strike will permanently deter a generation of passengers from using trains, unions have warned as they prepare for another five-day walkout.

Who is currently on strike?

Network Rail only has enough to operate 20% of regular capacity.

Instead of committing their members to a salary cut in the new year, unions must agree to the long-overdue improvements to working conditions required to put the industry on a sustainable foundation in order to resolve this issue.

Mick Lynch, general secretary of the RMT, stated that unprecedented ministerial meddling is blocking a resolution to the conflict.

He stated, “The government is preventing the union from reaching a negotiated agreement with train employers.”

“Since the privatization of the rail business in 1993, we have worked with the rail industry to establish successful negotiated settlements. In 2021 and 2022, we reached agreements across the network without the Department of Transportation’s involvement.

“However, in this issue there is an unprecedented level of ministerial meddling, which is preventing train employers from negotiating a package of measures with us so that we can resolve this disagreement.

While we work toward a negotiated agreement, we will continue our industrial action campaign.

Aslef general secretary Mick Whelan stated to the PA news agency that the union is “in it for the long haul” and added, “We don’t want to go on strike, but the companies have forced us into this position.”

“They have not provided our members a dime, and these individuals have not received a raise since April 2019.”

When inflation exceeds 14%, they ask train drivers at these companies to accept a pay cut in real terms, i.e., to work just as hard for much less.

“We are always willing to bargain; we never refuse to sit down and chat, but these corporations have made no offer, which is unacceptable.”

A spokeswoman for the Department of Transport stated, “Passengers have had enough of rail strikes and want the disruption to end.”

The government has proved its willingness to facilitate a resolution to rail conflicts and has shown itself to be reasonable. It is time for the unions to come to the table and do their share.

“Inflation-matching pay rises for all public sector employees will cost everyone more in the long run, increasing debt, fueling inflation, and adding an extra £1,000 to the cost of living for each household.”

“Unions should halt this strike action so that we can begin 2023 by resolving this harmful disagreement,”

»‘No 6 a.m. start for me!’: Commuters rejoice as rail strikes compel millions to go to WFH«