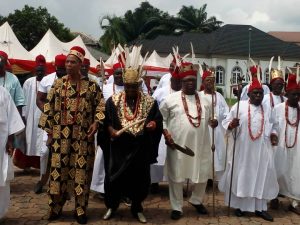 Nnokwa community in Idemili South Council area of Anambra state recently rolled out drums at the Odenigbo Palace of her traditional ruler, Igwe Emmanuel Ajamma, to celebrate the 2021 version of the annual new yam festival

Nnokwa, one of the direct descendants of the ancient Nri Kingdom, treats the yams with utmost care and sacred observances.

Addressing the community while performing the symbolic cutting of yam tuber into three pieces, Igwe Ajamma expressed happiness that this year’s harvest was plentiful and rich.

The Nnokwa monarch urged the younger generation to take more than a passing interest in agriculture, as a means of feeding their families and also for the prospective economic benefits.

In his speech, the President General of Nnokwa Progress Union, Barrister Emeka Maduabuchi, enjoined youths to shun all forms of crimes and embrace the new world of technology, to develop their talent and the entire community.

Barrister Maduabuchi used the occasion to brief the town on his administration’s development agenda, expressing joy that Nnokwa Civic Centre is on course.

Also reacting to the elaborate new yam ceremony, a former Director of Protocols, Government House, Awka and promoter of Ugbo Azu Uno in Nnokwa, Sir Charles Mbakigwe, said that the laborious processes undergone by farmers to produce the new yam, explains why it is celebrated with pomp and pageantry.

The ceremony came to its climax when Igwe Ajamma, surrounded by his cabinet chiefs, cuts the new yam into three, and the oldest men from the three quarters of Nnokwa, namely, Nnaku, Etiti and Ifite, in that order, were called out to pick from the pieces of yam.

They are expected to take the yam home as ‘ashi’ or food stuff from Igwe Nnokwa, for the villages in the quarters to add to their own produce and commence eating of new yam henceforth.

After performing this ritual, Igwe, his Ndi Ichie, their wives, and the Nze Tulu Ugo Nnokwa danced to the ushie royal wooden gong, to the admiration of all.

The regal dance was followed with serving of the new yam that has now been roasted and spiced with oil, ukpaka, and utazi vegetable.

After the eating of the new yam, various masquerades and women dance groups took their turns to entertain the audience.

The actual elaborate eating and drinking took place at the various obis of the Umunna, where cows are slaughtered, shared out to all males of the kindred’s, and some given to the women to prepare the new yam and this happened simultaneously across about twenty five kindred’s in Nnokwa community.