Skip to content
Home » News » News » NK is likely to continue nuclear and missile development in 2022, according to US military 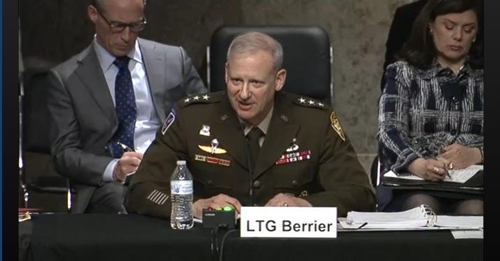 North Korea is expected to continue advancing its nuclear and missile capabilities this year to increase its leverage in any potential negotiations with the United States, the top US military intelligence official said Tuesday.

The remarks by Lt. Gen. Scott Berrier, director of the US Defense Intelligence Agency, come amid speculation that Pyongyang may conduct a nuclear test as early as this month.

“We expect North Korea to continue its nuclear, missile, and military modernization efforts in 2022 as it emphasizes bolstering its strategic deterrence and countering the military capabilities of the US–South Korean alliance,” Berrier said in a global threat assessment report submitted to the Senate armed services committee before a budget hearing.

“Kim Jong-un will likely use these developments to try to increase his leverage in any potential negotiations with the United States,” he added, referring to the North Korean leader by his name.

North Korea has already staged 15 rounds of missile launches this year, while also ending its self-imposed moratorium on long-range missile testing after more than four years by firing an intercontinental ballistic missile in March.

Berrier noted the North may conduct additional weapons tests, including a nuclear test.

“To demonstrate North Korean strength and resolve, leadership could consider further missile testing of various ballistic and cruise missiles, conduct a cyberattack, or test another nuclear device,” he said.

A state department spokesperson said last week that the North may be preparing to conduct a nuclear test as early as this month.

Pyongyang has conducted six nuclear tests, with the last test held in September 2017.

“Fissile material production continues in North Korea, which maintains its plutonium program and probably is expanding it uranium enrichment program,” she said in her own threat assessment report submitted to the Senate committee.

Berrier noted the North will seek to justify its actions by blaming the US and South Korea.

The North periodically accuses US-South Korea joint military exercises of being war rehearsals. Seoul and Washington have repeatedly denied the accusation, saying the exercises are strictly defensive in nature and that they harbor no hostile intent toward Pyongyang.