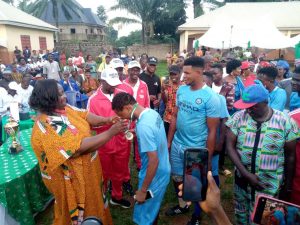 Declaring the match open, Governor Obiano represented by the Chairman of Anambra State Sports Development Commission, Chief Tony Olih, said the event is in line with his administration’s vision to meaningfully engage the youths in all the communities in the State for the purpose of achieving sports development and unity among Ndi-Anambra, and encouraged youths to continuously nurture their talents in sports.

Anambra State Commissioner for Youth Empowerment and Creative Economy, Professor Theresa Obiekezie, who commended the Obiano administration and supporters for sustained sports development programmes in the State, said such event, aside taking youths away from crimes, will also expose them to more opportunities.

The member representing Njikoka Constituency one in the Anambra State House of Assembly, Dr Timothy Ifedioramma, and his Awka South Constituency one counterpart, Dr Nnamdi Okafor, described the sponsor as a great son of Enugwu-Ukwu Community, Anambra State and Nigeria, and thanked him for assisting the government in exposing the youths’ talents in sports.

The sponsor, Chief Oguejiofor, represented by Mr Chijioke Nwakor, said the maiden edition of the competition was intended to productively engage the youths, promising to sustain the sports event and make it State-wide.

Handing over the trophy to the winner of the competition, Chief Obidigwe enjoined the youths to actively participate in the November sixth governorship election in the State, in order to elect Professor Chukwuma Soludo as a worthy successor to Governor Obiano for more of such empowerment programmes.