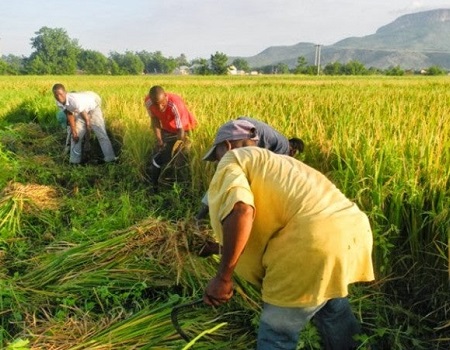 Farmers in Nigeria have called for the spread of the coverage of the Anchor Borrowers Programme (ABP), a project targeted at boosting food production under the supervision of the Central Bank of Nigeria (CBN), to more states in the country due to the impressive results recorded in rice and maize production.

Although the country is said to be deficient in the two commodities, production have increased significantly through the ABP.

The farmers lamented that seeds, fertilizer and other inputs for food crop production have become too expensive, and escalating assistance to them through the ABP scheme is not only desirable but also expedient for the country.

The umbrella body of various commodity associations in Nigeria, the All Farmers Association of Nigeria (AFAN), said without deepening various existing funding systems and intervention programmes of the apex bank, improved seeds, fertilizer and other agro-chemicals that would help farmers to produce adequate quantity of food would be a mirage.

Linking more off-takers, financial institutions and insurers to empower more farmers with inputs and finances with pre-agreed buy-back prices should be spread to every state, the association disclosed.

“Without such assistance, most farmers, due to financial constraints, would only recycle grains as seeds, avoid use of fertilizer and agro-chemicals and would do manual tillage, planting and weeding with resultant poor yields,” it said.
Meanwhile, the Central Bank of Nigeria (CBN) recently disclosed that it would finance the cultivation of 600,000 hectares of grains in the 2022 wet season farming.

The partnership between the CBN and Maize Association of Nigeria (MAAN) through the ABP had produced a total of 300 metric tonnes in 2021, which were displayed in 12 pyramids and released to the market through allocations to food and agro-allied stakeholders.

The governor of the bank, Godwin Emefilele, said: “As we prepare for another wet season programme, the Central Bank of Nigeria is committed to financing over 600,000 hectares. Our strategy is hinged on improving productivity by providing more funding for the anchors to enable them to utilise high quality inputs and good agronomic practices to boost output.”
The apex bank has spent N864 billion on 4.1 million farmers cultivating 5.02 million hectares through the Anchor Borrowers’ Programme (ABP) so far.
The farmers include grain, cereal, cassava, cocoa, yam and sweet potato farmers, among others.
During the Rice Farmers’ Association of Nigeria (RIFAN) rice pyramids in Abuja, President Muhammadu Buhari said the ABP had supported over 4.8 million small-scale farmers with planting inputs and market linkages that have boosted their means of livelihood and food production, saying, “The ABP has so far supported over 4.8 million smallholder farmers across Nigeria for the production of 23 agricultural commodities, including maize, rice, oil palm, cocoa, cotton, cassava, tomato, and livestock. Today, rice production in Nigeria has increased to over 7.5 million metric tonnes annually.”

Nigeria produces about 12.0 million tonnes of maize, while yearly demand hovers around 20.0 million metric tonnes, fueling hike in price, and productivity of farmers has remained as low as 1.5 to 2.5 metric tonnes per hectare.
A maize breeder at the Institute of Agricultural Research and Training (IAR&T), Moor Plantation, Ibadan, Professor Samuel Olakojo, said improved seeds and new production technologies would boost productivity of farmers and ensure closing the production gap.

He added that in the face of financial constraints of smallholder farmers in the country, and unwillingness of financial institutions to advance loans to farmers individually, the ABP scheme of the Federal Government should be made more elaborate and all-encompassing so that more maize and other grain farmers could participate.

This, he explained, is a national investment that would pay off in terms of food sufficiency and employment opportunities while feeding industries with raw materials, in the long run.

A woman farmer based in Odeda Local Government Area of Ogun State, Mrs Modina Falodun, noted that: “The Federal Government should try as much as possible to extend the coverage of ABP to more states so that farmers particularly women can be empowered so that the issue of food security in Nigeria can be a thing of the past.”
Nigerian Tribune