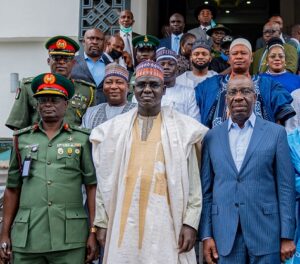 The Edo State Governor, Mr. Godwin Obaseki, has expressed optimism that the country will overcome its present security challenges, but called on Nigerians to join hands with the government in the fight against insecurity.

Obaseki stated this while addressing the Nigerian Ambassador to the Republic of Benin and former Chief of Army Staff, Lt. Gen. Tukur Buratai, during a courtesy visit at the Government House, Benin City.

The governor, who hailed Buratai for his service to the nation, said the country is building on the foundation laid by the ex-Army chief in the fight against insecurity.
According to him, “The foundation you laid as Chief of Army Staff is what we are building on today. You are here in Edo because we appreciate what you have done for this country.

“Our Esama of Benin, whom we are very proud of, is a very vast and foresighted man that is always full of gratitude. When he named that centre after you, you were in service. It was deliberate because at no time in our history were we faced with the kind of security challenges that you faced as Chief of Army Staff.

“You are here today to commission a centre. At no time in our history have we needed to focus on security as strategically as we should now, which is why this centre for me is important. It is necessary that we are taking the issue of security seriously.”

He continued: “As a state, we will continue to work with the national authorities. Like I keep saying, Nigeria has come to stay. We are facing our challenges like other countries and communities in the world and that is where we need leaders like you to step up.

“It doesn’t matter what people do to you personally; as long as you know you are there serving God and the people, doing what we believe is the right thing and in the interest of our people and our country.

“As far as we are concerned in Edo, we will continue to do our own bit in contributing to the harmony and unity of Nigeria,” the governor reassured.

Earlier, Buratai said he was in Benin to inaugurate the Buratai Centre for Contemporary Security Affairs, a centre which was named after him by Igbinedion University, Okada.