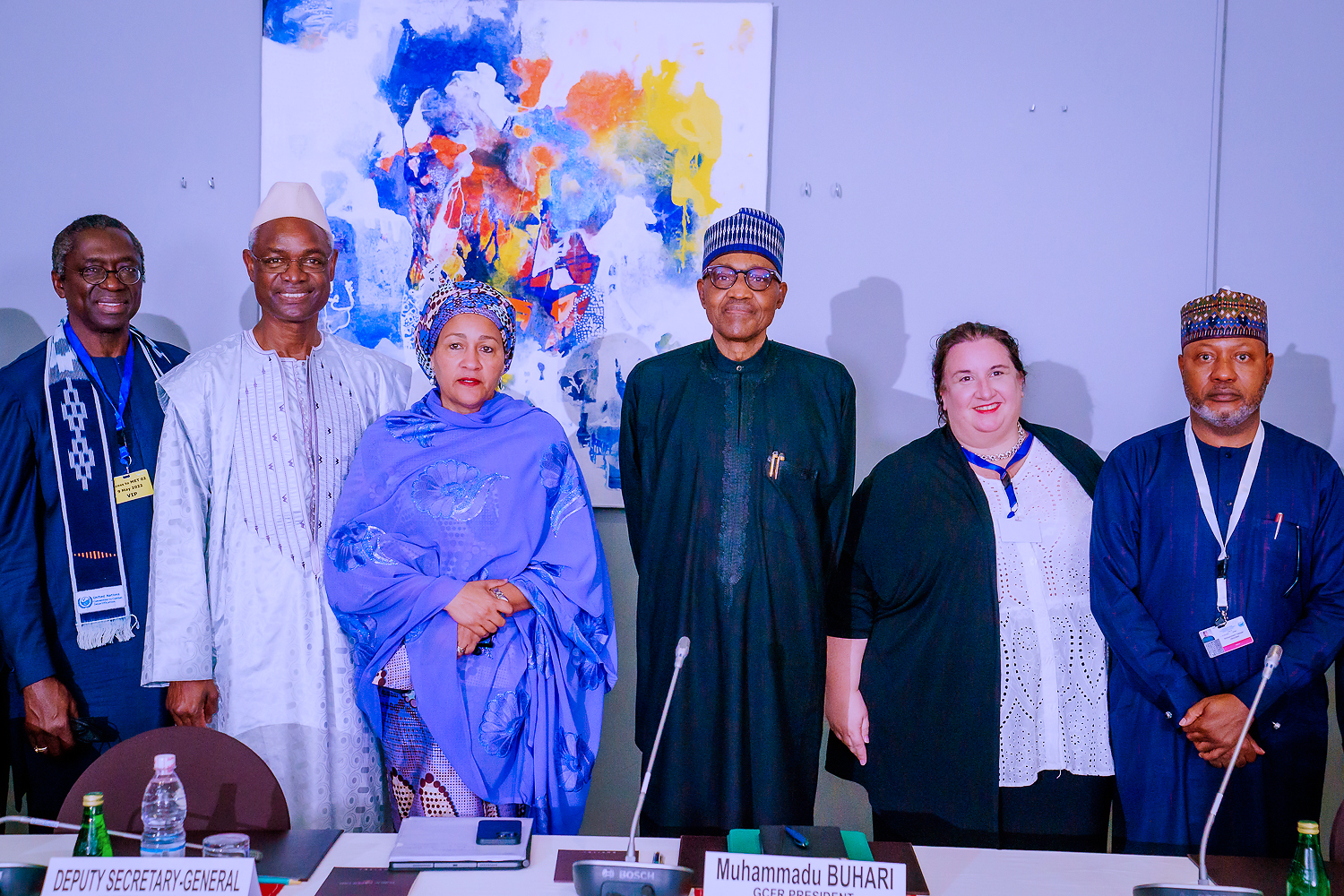 Nigeria’s President, Muhammadu Buhari has urged the World Bank, African Development Bank and other partners to support the One Planet Summit initiative.

He also called for the activation of the $19 billion pledge, which would be utilized for land restoration, tree planting, development of climate resilience infrastructure and investments in small and medium-sized farms.

Speaking on Monday in Abidjan, at a side event he convened at the ongoing UN Conference Of Parties, COP15,  in his capacity as the President of the Conference of Heads of State and Governments of the member states of the PAGGW, President Buhari underscored the importance of recharging Lake Chad, now down to 10 percent of its water volume, as eleven Sahel African states discuss ways of accessing and utilizing the $19 billion pledged by donors for the activities of the Pan African Great Green Wall Agency (PAGGW).

“The inter-basin transfer of water from Central Africa to the Lake Chad should be taken seriously,” asking the secretariat of the Agency, funders and the soon-to-be appointed consultant to carry out the measure as a way of restoring the socio-economy of the more than 30 million people of the Lake Chad basin area.

“As it is at the present,” the President informed the meeting, “The drying up of the Lake Chad had destroyed fish farming, animal husbandry and crop agriculture leading to social and economic dislocation with serious consequences for peace in the basin area. This has led to migration to Europe by many, creating problems for you over there. These should engage your attention as a committee,” the President said.

“All of you may wish to know that, in December 2021, I was elected to lead and drive the Agenda of the PAGGW bloc for the next two years.
“This bloc, which includes Nigeria, Senegal, Niger, Sudan, Mauritania, Ethiopia, Mali, Eritrea, Djibouti, Burkina Faso and Chad is facing dire and present danger due to the devastating effect of desertification and drought which is impacting negatively on the security of our communities and the livelihood of our people. There is, therefore, an urgent need to confront these challenges associated with desert encroachment and drought.’’
President Buhari requested more support for The One Planet Summit Initiative, and the political will to actualize the mandate.

“It is on this note that on behalf of member States, I welcome The One Planet Summit Initiative that pledges $19 Billion to support the activities of the PAGGW which necessitated this very important engagement with you this morning.

“The purpose of this meeting, therefore, is to draw your attention to this pledge and to inform you formally, that member states want to trigger the process for accessing the funding by utilizing the GGW Accelerator window mainly to address the following: Land restoration & tree planting, Investment in small and medium-sized farms/support to smallholder farmers, Develop climate resilience infrastructure, Institutional framework to enhance security, stability and governance,  and Capacity Building.

“I, therefore, call on you especially the World Bank, African Development Bank and the One Planet Summit Initiative to support this drive,’’ he said.
Task Team

The President also called on the multilateral institutions to set up a task team to work with PAGGW.
“I will further request the partners, particularly the United Nations Conference to Combat Desertification (UNCCD) and One Planet Summit to advise on a suitable Financial Consultant for the PAGGW that can coordinate the process under the auspices of the UNCCD and PAGGW in a transparent manner.

“It is my hope that the parties to this meeting will give us maximum cooperation in this regard and make good their pledge to support Africa’s drive to address these climate challenges.

“Finally, I will also direct Nigeria’s Minister of Environment to convene a meeting of Council of Ministers of member states to brief them on the outcome of this brief meeting.’’
New Era

In her remark, the Deputy Secretary-General, Amina Mohammed, who represented the United Nations described the meeting as “A new era in the Great Green Wall program,” and demanded from the Agency, the 11 African nations involved as well as the group of donors under One Planet Summit to move proactively “With scale and urgency,” to set up a government governance structure, focus on land restoration, put in place the digital backbone to connect farmers with markets and ensure that the programmes and activities of the PAGGW were well rooted in individual national plans.
The Deputy Secretary-General of the UN advised countries to include the One Planet initiative in their national plans, and not treat it as an added-on development project.

She said the initiative must “Align and adhere,’’ to the priority of top national development plans in order to succeed.
“I believe that the capacity and commitment of the secretariat of the PGGWA, working together with UNCCD, and your team will be in the best place to engage with partners to develop the pipeline that will ensure that across the countries we are speaking to today these efforts are made to come to realize sooner than later,’’ she added.

The Executive Secretary of the UNCCD, Ibrahim Thiaw described the coming together of Nigeria, Senegal, Mauritania, Mali, Burkina Faso, Niger, Chad, Sudan, Ethiopia, Eritrea and Djibouti as “A great inspiration,” hoping the $19 billion pledged at the One Planet Summit in Paris in 2021 would “Turn the dollars into hectares.”

This was President Buhari’s first assignment at the PAGGW Conference of Heads of State and Government following his election to head the institution in December last year.