Skip to content
Home » News » News » Nick Wisniewski, 66, has not had a neighbour at his Wishaw apartment since December 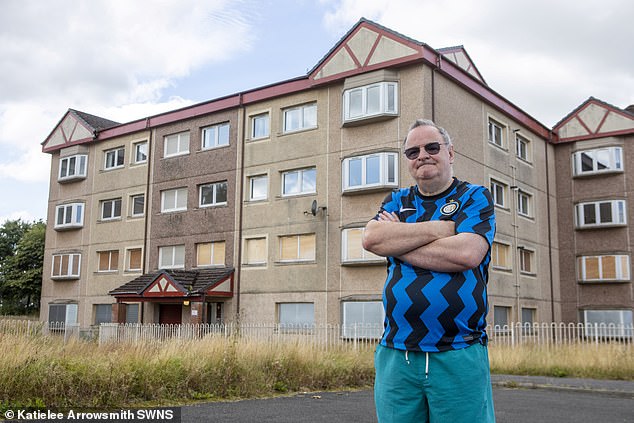 A elderly bank worker is the last person living on ‘Britain’s loneliest street’ which is all slated to be taken down – but he’s refusing to go.

Nick Wisniewski, 66, has had no neighbours living beside him in the 128 apartments on Stanhope Place housing estate in Wishaw, North Lanarkshire, since the last of roughly 200 tenants walked out in December.

Stanhope Place’s eight apartment buildings and other residences are all slated for destruction, but Nick refuses to leave despite council efforts to make a deal with him.

However, the retired TSB bank employee who lives there with his 35-year-old son refuses to go because he says the offer wouldn’t be enough to purchase elsewhere and that he is also too elderly to acquire a mortgage.

He also argues that he is too old to get a mortgage.

The last person departed in December, so it’s almost a ghost town today, according to Nick.

Being the lone resident here makes the environment strangely calm.

I’m accustomed to it now, but there’s nobody to talk to, so it may feel lonely.

There are eight blocks here, each with 16 apartments; when there were around 200 residents, finding a parking place was difficult.

Nick purchased his apartment in 2017 under the Right to Buy programme, which assisted council renters in getting a deal on a property.

Council leaders made Nick an alternate housing option in a terraced home for two years rent free, but he declined.

Despite not wanting to leave his house, he said he is concerned about where he would wind up living.

‘When people left, they simply put old stoves, beds, and washing machines outside. It was a shambles,’ said Nick, who retired last year.

“The council just left the apartments vacant once residents went away.”

There is no security, so anybody might enter the vacant apartments, and several windows have been shattered.

Fortunately, I haven’t run across any problems. It’s absurd how overgrown the grass is.

“I believe the council is neglecting it to irritate me or in the hopes that I would get frustrated and quit.”

They made me an offer of £35,000 for my apartment and two years of rent-free housing elsewhere.

However, I’m not willing to start paying rent again, and £35,000 is insufficient to purchase a new home.

I’m concerned since I’m unsure about my future residence.

“I didn’t work my whole life to have my house taken away when I’m too elderly to obtain a mortgage on anything else,” the homeowner protested.

To leave my house would be really difficult.

‘We fully realise this is a delicate subject and are working closely with the resident,’ a North Lanarkshire Council official said.

We are working in line with our principles to ensure the resident obtains a fair deal and to help him so that he finds acceptable new housing, but it would not be appropriate to reveal the precise financial specifics.