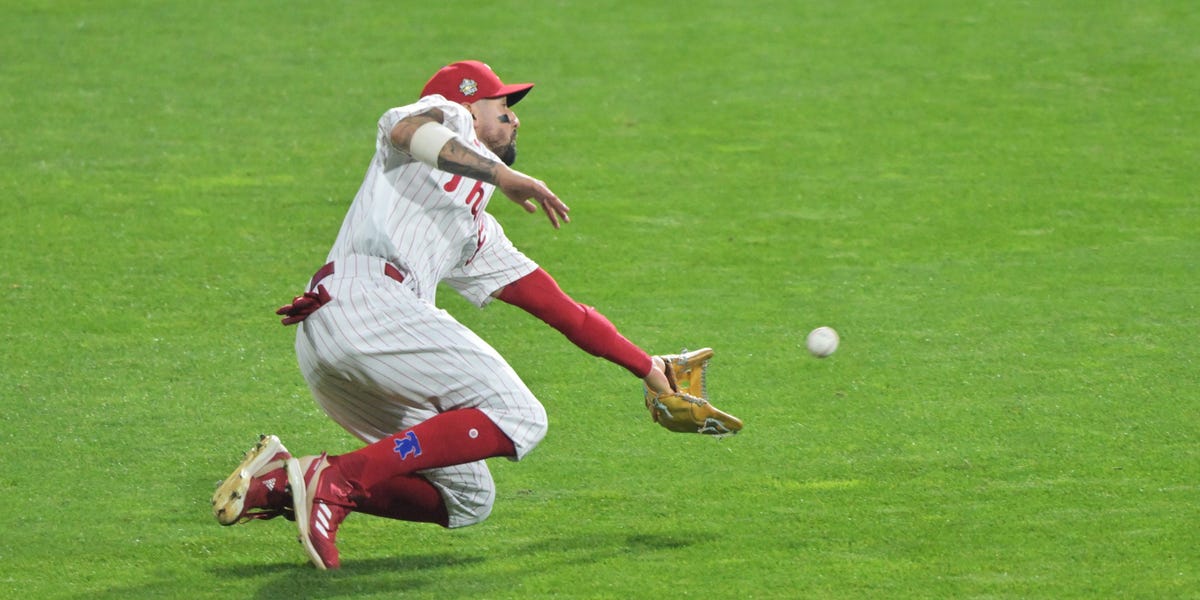 The Phillies never intended for Nick Castellanos to be their regular right fielder.

When the organization signed Castellanos after his time with the Reds, the idea was for Harper to remain in right field and for Schwarber and Castellanos to alternate playing left field and serving as designated hitter as needed.

However, Castellanos was shifted to right, where he has remained throughout the playoffs, when Harper’s mid-season injury rendered him unable to play the field.

After Game 1 of the World Series, Castellanos told reporters, “Baseball happens, and he ended up getting that injury, and I happily took the job of just being out there every day.”

Castellanos has made right field his home during the playoffs with strong defensive play, including three virtually identical web gems he’s made at crucial times for his club, even if it wasn’t the position he was originally anticipated to play.

In the first game of the NLDS, Castellanos’ first catch was made against the Atlanta Braves. Catcher William Contreras for the Braves scooped a fastball into shallow right field with the Phillies leading 7-6 in the bottom of the ninth.

Castellanos almost perfectly timed his leap to catch the ball, sliding beneath it as it was about to touch the ground.

The Phillies managed to win by holding on.

Castellanos again made the grab, diving in to rescue the game in the bottom of the ninth to force extra innings, only two weeks later, in Game 1 of the World Series.

In the bottom of the 10th inning, the Phillies prevailed.

The two catches seem to be practically similar when placed next to one another.

Castellanos repeated the feat on Tuesday night on the first pitch of Game 3 of the World Series. This time, his grab occurred in front of a home audience, which was a terrific reward for his hard work.

It’s difficult to be shocked by Castellanos’ defensive performance at this point.

Alec Bohm, a third baseman for the Philadelphia Phillies, remarked after the game, “I see a blooper over to right field, and I see Nick diving in and collecting it and lying on the ground.” Just, yes, that’s the image I get in my head when I watch a ball go.

The Phillies’ game plan on Tuesday night included halting Houston early after they were able to take 5-0 leads in both Games 1 and 2 of the Series. In Game 3, Castellanos made a catch that prevented the game’s first runner from reaching base. Houston would go scoreless the rest of the way, losing 7-0 to the Phillies and falling down 2-1 in the World Series.