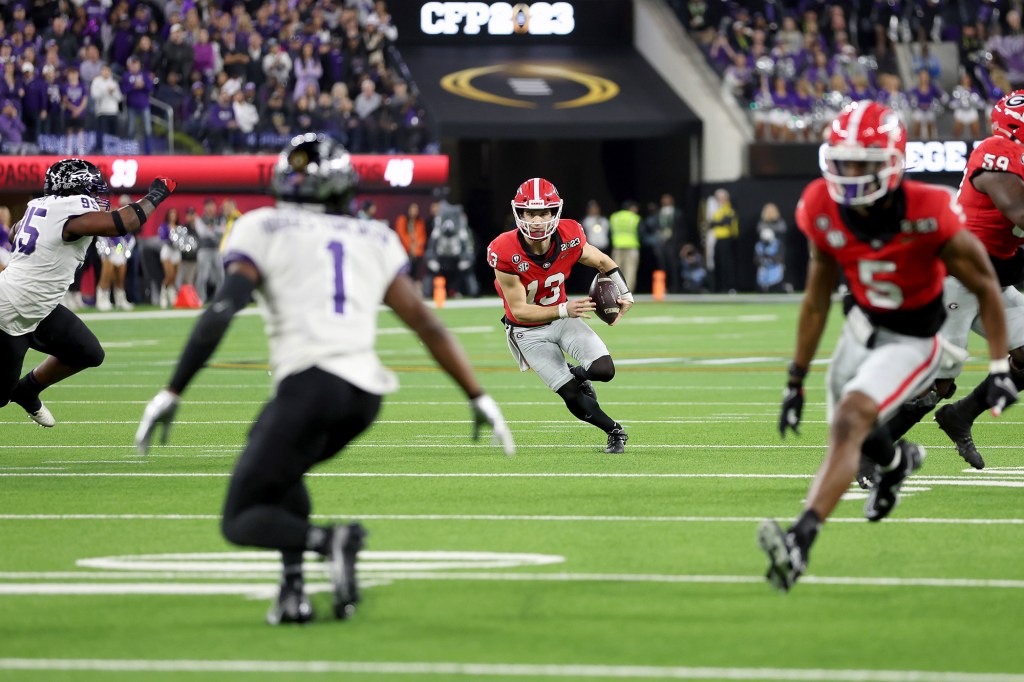 After becoming just the sixth starting quarterback in college football history to win back-to-back national championships, he seems up for the challenge.

Georgia coach Kirby Smart said after his Bulldogs thrashed TCU, 65-7, at SoFi Stadium on Monday night to repeat as national champions: “The fact that he’s playing in an NFL offense with an NFL coordinator who coached NFL quarterbacks should tell people he’s not going to get marbles in his mouth when he’s spitting out seven-word calls.” And many NFL teams think that is cool.

Bennett, who is 25 years old and only 5 feet 11 inches tall, fails the eye test. Scouts won’t be wowed by his arm. It could be difficult to be selected. But there were also comparable skepticisms about him at the college level, including concerns about his physique, arm power, and aptitude. All he accomplished was lead Georgia to back-to-back championships, win 28 of his 31 starts, and be named a Heisman Trophy finalist this season.

Bennett said, “Hard worker, really good at football, smart,” when asked what he hoped the NFL saw in him. But they will notice that. That will be handled automatically. We are the national champions today.

Bennett excelled in the greatest game of his career, passing for 304 yards and six touchdowns in all. He performed better when the stakes were higher. He scored 15 touchdowns, had one interception, and completed 68.7% of his throws in four playoff games over two postseasons. Because of how shrewdly he played, turning to running plays at the appropriate times, anticipating blitzes, and using his legs to make plays when throws weren’t available, Smart believed Monday night was his best performance. This is the reason Georgia’s head coach thinks his quarterback has a bright future.

According to Smart, “Stetson’s [play] speaks for himself, the way he leads and prepares.” “What he did tonight was simply extraordinary. His mental makeup is such that a quarterback who feels he can make every ball. With some of the checks and decisions he made, I believe he most likely had his best game of his career. Simply really elite.

Afterward, in the midst of the festivities, Smart discovered his son Andrew, age 10, sobbing. He had just learned Bennett was no longer eligible, which was horrible news. As he left Georgia.

Smart informed his kid that the man was 25 years old. “He needs to leave. He must get away.

It’s time for Stetson Bennett to face yet another obstacle.