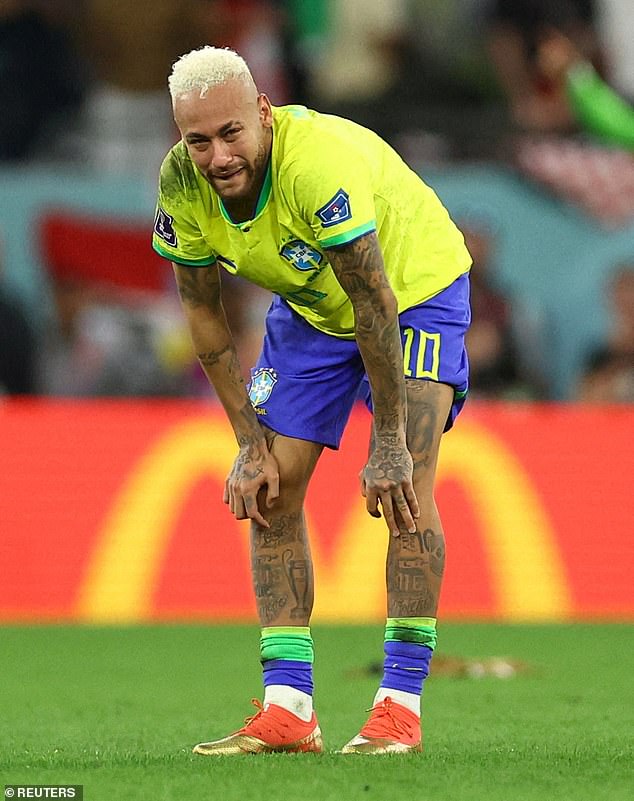 Neymar has been found not guilty of fraud and corruption in relation to his controversial 2013 transfer from Santos to Barcelona.

The PSG forward, who is mourning Brazil’s shocking elimination from the World Cup by Croatia, was accused, along with his father and the former presidents of Santos and Barcelona, of concealing the exact cost of his transfer.

Brazilian corporation DIS, which controlled forty percent of the player’s rights, alleged that it did not receive its fair share of the transfer fee since the genuine worth was undervalued.

Tuesday, the Spanish court issued a statement stating that neither the existence of a fraudulent contract nor the intent to hurt DIS had been established.

Neymar has been exonerated of fraud and corruption in relation to the controversial 2013 sale of the Brazilian football icon from Santos to Barcelona (seen in tears following Brazil’s elimination against Croatia on Friday).

Following the decision by Spanish prosecutors to drop all charges during the trial last month, the verdict is not unexpected.

That left only DIS’s attorneys to continue making their case.

DIS had wanted a five-year prison sentence for Neymar, who is 30 years old.

However, with the withdrawal of the state’s attorneys, DIS’s attorneys decreased their demands to two and a half years of imprisonment.

Neymar had earlier informed the court that he could not recall if he participated in the conversations that led to an agreement with Barcelona in 2011 regarding his transfer two years later.

Before charges were dismissed, Josep Maria Bartomeu (shown in the center) was also accused of involvement in the scheme.

The trial marked the conclusion of a lengthy legal battle around Neymar’s 2013 relocation to Spain.

Neymar, one of the most recognizable figures in sports, was one of nine defendants on trial for corruption, with his parents and the business that oversees his affairs, N&N.

After a complaint was made in 2015 by DIS, a Brazilian business that owned forty percent of the player’s sporting rights when he played for Santos, investigators began looking into the transfer.

Prosecutors estimate the transfer cost was at least £71million, however Barcelona claimed it cost £49million.

However, DIS asserted that Neymar, Barcelona, and the Brazilian club conspired to conceal the full cost of the transaction.

Two former Barca presidents, Sandro Rosell and Josep Maria Bartomeu, and an ex-Santos executive, Odilio Rodrigues Filho, were among the other defendants.

Earlier in the trial, Neymar informed the court that his father has always handled contract negotiations.

In 2011, while playing for Santos, Neymar was the most promising young footballer in the world.

He was asked if he had participated in discussions for a contract he signed in November 2011 while still a member of his boyhood club Santos in Brazil, in which he promised to play for Barcelona – the club he went to in 2013.

Neymar originally said, “I don’t recall,” before adding, in response to a second inquiry about negotiations and contracts from the state prosecutor: “I’m not sure.” ‘I didn’t participate. My father has always been responsible for and responsible for this. I sign everything he instructs.

The football player, who wore a dark blue suit with a matching tie over a white shirt, acknowledged, “I got offers from other clubs, but Barcelona was always my ambition.” Real Madrid was a possibility, but my heart has always been with Barcelona.

Neymar addressed the stand after Real Madrid president Florentino Perez testified that the club offered the Brazilian international 45 million euros to sign in 2011.

He claimed, “I have never met Neymar and have never spoken with him.”

Ten years ago, we were interested in signing Neymar. Players are free to go wherever they choose. Neymar chose to move to Barcelona because he desired to do so.

Five years ago, Neymar’s unexpected departure for PSG ignited a series of legal problems, with Barcelona withdrawing their contract extension incentive and suing the player for breach of contract, while Neymar countersued.

In 2021, the parties achieved a ‘amicable’ settlement outside of court.