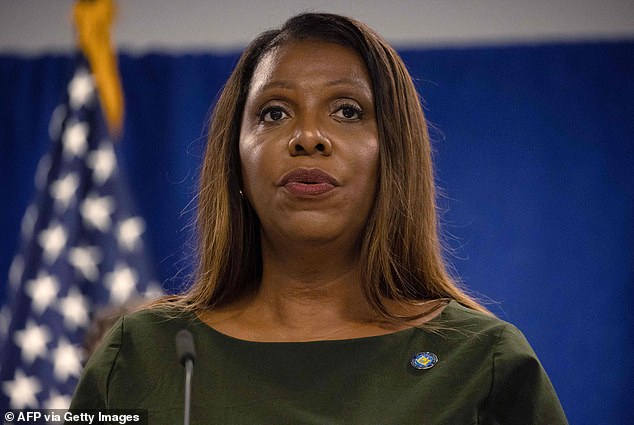 The massive real estate and branding operation that Trump has run himself for decades will have an independent monitor under the control of the New York judge hearing the $250 million case against him, the judge announced on Thursday.

Judge Arthur Engoron of the state of New York issued the decision after stating that the government had carried its “heavy burden” in this case. The Trump Organization has been charged with routinely inflating asset values in order to get advantageous conditions from banks while robbing taxpayers of millions in tax income, according to New York Attorney General Letitia James and her team of prosecutors.

The action would restrict Trump’s ability to strike headline-grabbing transactions, sell off assets, or engage in corporate reorganization—things he has had a pretty free hand to do since taking over the business started by his father, Fred Trump.

It would mandate, among other things, that the company provide the AG’s office two weeks’ notice before selling or transferring assets. In part, James’ office argued for the monitor by pointing to recent actions taken by the business, such as the incorporation of a new LLC in Delaware just before her agency filed the lawsuit.

Let’s be honest about this, Engoron said to Trump’s new lawyer Christopher Kise, a seasoned litigator. They delivered all of these papers. What kind of proof are you looking for? He said in court, “This is a petition for preliminary injunction.

Kise described the system as having socialist tendencies. He made reference to Trump’s portfolio of golf clubs and prized real estate in Manhattan, south Florida, and other locations, saying, “The order itself actually borders on nationalization of a private firm.”

According to Politico, the case may take a year or more, placing the auditor in control during a crucial year for former President Donald Trump, who has been moving closer to a bid for the presidency in 2024.

Trump gave the reins to his adult sons Donald Trump Jr. and Eric, as well as the former CFO Allen Weisselberg, while he was in the White House. In a separate criminal tax fraud trial involving the Trump Organization, Weisselberg, who admitted to tax fraud, is testifying for the prosecution.

Judge Engoron’s choice of an independent auditor comes a few days after Donald Trump last week attacked the judge in a furious article on his website Truth Social, ranting against the judge who found him in contempt of court and fined him $110,000 for skipping a deposition.

That decision was made after James’ protracted research. Trump launched his assault a week after a state administrative judge rejected his request to transfer the case to a different venue.

Trump stated on his Truth Social platform, “The only person who may be worse than weak on violent crime A.G. Letitia “Peekaboo” James, is the Judge we have on her ludicrous & extremely politicized lawsuit against me & my family.

According to Trump, “His name is Arthur Engoron, and he is a cruel, prejudiced, and mean ‘rubber stamp’ for the Communist takeover of the magnificent and wealthy American enterprise that I have established over a long period of time.” ‘ My fiercest adversaries chose him for the position. A new judge was supposed to hear the case, but he wants to retain it. No jury, no civil rights for me!

Engeron, a graduate of Columbia University and New York University Law School, was chosen in 2015 to serve in the First Judicial District of the state’s Supreme Court.

Earlier, Engeron penalized Trump $110,000 and had him take a deposition in the matter. Trump often referred to the Fifth Amendment when he ultimately took the test.

After a three-year investigation, James filed a lawsuit against Trump last month, accusing him of committing “multiple crimes of fraud.”

James is attempting to strip Trump of his right to do business in the state for years in addition to trying to get back the money she claims he robbed taxpayers of.

In the civil lawsuit, the prosecution accuses Trump and his three adult children of inflating real estate values when applying for loans to grow his real estate enterprise. James charged Trump of inflating asset values by billions and utilizing those inaccurate evaluations to get advantageous loans.

Making false claims about your financial situation is not part of the “Art of the Deal.” It’s the stealer’s art, she said.

The defense team for Trump opposed to Judge Engoron taking on the case. They exploit Engoron’s involvement in the case to claim James’ office is trying to “judge shop.”

Late last month, Trump’s attorney Alina Habba sent a letter to a state administrative judge requesting that the matter be transferred from Engoron to the Commercial Division of the court, which handles complicated cases.

The government’s move in the issue was denounced by her last week, and she said it was “nothing more than a thinly-veiled effort to retain this case with Justice Engoron rather than have it transferred to the Commercial Division where it belongs.”

Judge Aileen Cannon, who was nominated by Trump and approved weeks before he left office, sits on the bench at the Florida court where Trump’s own staff is accused of filing a lawsuit relating to the FBI search for federal records at Mar-a-Lago.