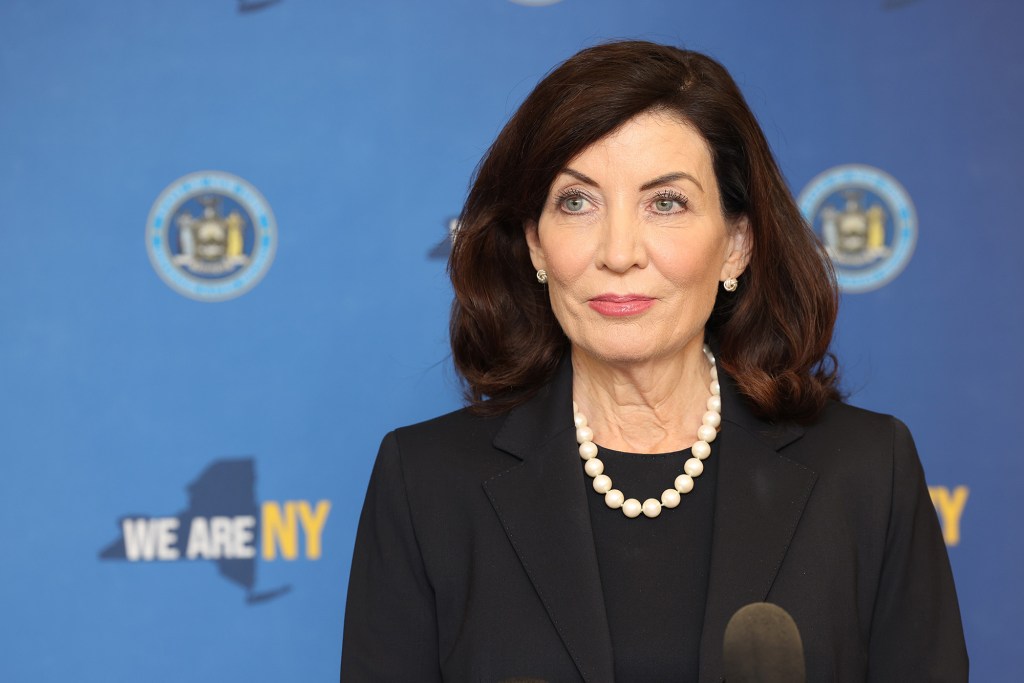 MTA officials are pleading for another massive government bailout, and a group of Albany Democrats is pressing Governor Kathy Hochul to grant their request.

In a letter sent to Hochul on Monday, 30 assembly members, led by Amy Paulin (D-Westchester) and Jessica Gonzalez-Rojas (D-Queens), demanded additional funding to avoid service cutbacks and instead raise the frequency of trains and buses to every six minutes.

The letter acquired by The Post adds, “Without maintaining and sustaining public transit, New York’s economy would collapse, our neighborhoods will become separated, and our existential climate goals will be completely unattainable.”

“To reach the deadline, we must not only save the public transportation on which New York relies, but also invest in its expansion and utilize existing infrastructure to operate buses and trains more often and consistently, reduce wait times, decrease journey durations, and attract more customers.”

The letter is a response to state comptroller Tom DiNapoli’s warning last week that the MTA may be forced to implement drastic service cuts and fee increases in order to recover pre-pandemic income levels.

Long dependent on tolls to operate trains and buses, the transit authority’s funding model has grown obsolete as fewer New Yorkers choose to travel the subways.

According to the forecasts of McKinsey & Company analysts, the number of passengers is likely to stay as low as 73% of pre-pandemic levels through the middle of 2026.

A total $15 billion inflow of government funds in 2020 and 2021 secured the MTA’s budget temporarily. According to its most current budget projection, the agency will need $600 million in 2023 and nearly $1 billion annually for the next three years.

If Hochul just repairs these gaps without providing funding to prevent a rate increase, the MTA will be forced to increase fares by 11% by 2026, reaching more than $3 per trip.

Amy Paulin, a Democrat from Westchester, is the chair of the State Assembly committee that governs the MTA.
Face of Assemblywoman Amy R. Paulin

While the letter does not specifically address rate increases, Gonzales-Rojas told The Post that failing to prevent the rise or adequately support the MTA would be damaging to the system and its passengers.

She stated, “We are adamantly opposed to the planned fee increases and service reductions.”

People will not return to the offices if they are required to pay more or receive poorer service.

The assemblywoman stated that frequent service is also vital for enhancing safety.

“We must guarantee that service continues to operate in a dependable manner,” she added. When waiting for the bus on a dark corner for twenty minutes, one does not feel comfortable.

According to Assemblywoman Jessica Gonzalez-Rojas, fare rises and service reductions would be horrifying for New Yorkers.
AP

Sunday on WABC-TV, MTA CEO Janno Lieber said that a “large” fee increase would be devastating for riders.

“We do not want a drastic fare increase. It would not be fair to the majority of working-class and middle-class New Yorkers who have been riding through COVID, he stated. “I have asked Washington, Albany, and City Hall, all of whom have a responsibility in resolving this… budget imbalance, to work together.”

Officials had intended to increase rates earlier this year, but Hochul’s state financing allowed her selected MTA leadership to “indefinitely” postpone any increases.

Hochul stated on November 22 that there are “many” potential financing sources for MTA rescue and that she “has a multitude of options” to solve the situation.

“Governor Hochul took steps last year to prevent price increases or service cuts, and she is dedicated to providing riders with safe, high-quality, and dependable transit service,” spokesman John Lindsay said in a statement. We will continue to collaborate with federal partners and state legislators to determine the best ways to promote public transportation.