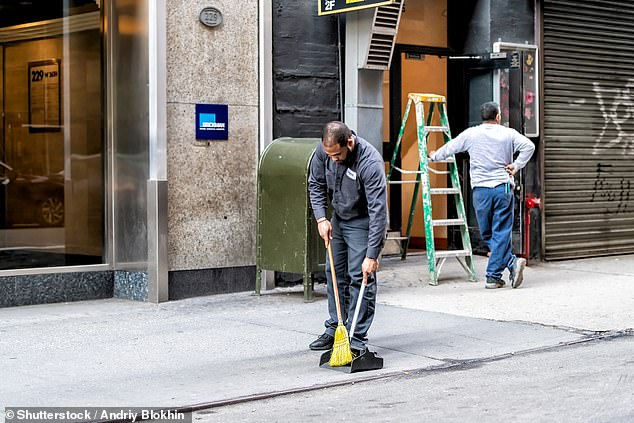 If their demands for greater pay and benefits are not satisfied, the leader of a union representing 32,000 residential building workers in New York City says they might go on strike as soon as Thursday.

Property managers at 3,000 of the city’s most prestigious buildings want to reduce the number of vacation and sick days available to doormen, superintendents, security officers, cleaners, and other personnel.

They also want the workers – who earn an average of $55,000 a year, to shoulder more of the cost of healthcare, which is currently fully paid for by the management companies.

But the workers’ union says its members have been ‘essential’ during the pandemic, helping to keep tenants safe by shuttling packages, looking after pets and picking up delivery orders for them as they quarantined.

Buildings have already put their tenants on notice, warning them that they may soon have to take their own trash out and limit visitors if the city’s building workers decide to strike for the first time in 30 years.

Alisa Kauffman, a dentist who lives in a building on the Upper West Side, called the whole situation ‘upsetting’ and said she would step in to fulfill some of the duties if she had to.

No agreement has been reached as of Tuesday afternoon, and thousands of workers have authorized the union to call a strike if needed.

The workers have the support of New York Gov. Katy Hochul, who spoke at a rally in support of a new, fairer contract in the Upper East Side last week.

‘Who showed up every single day? You showed up. You had our backs,’ she said. ‘They call you essential workers. That sounds nice, but if they’re that essential, why don’t we pay them what they deserve?’

In a letter obtained by DailyMail.com, one Manhattan building manager told residents that if a deal isn’t reached by that date, residents will have to limit visitors, pause move-ins and move-outs, cut back on deliveries from online shopping, and put their own garbage on the street on collection days.

Dentist Alisa Kauffman, 62, told the New York Post she’d step in if she had to, but she wouldn’t be happy about it.

‘If I had to step in, I probably would. Would I want to? No, because I don’t think it’s an easy job and I don’t think we’re going to be safe and secure without real doormen,’ said the dentist, who lives in the Park Ten co-op next to Central Park.

A studio apartment at the building, located in the Upper West Side, sold for $700,000 last week. A two-bedroom went for $3.75 million in March, according to StreetEasy.

‘The city has its issues, and we absolutely wouldn’t want anyone to take advantage of us not being protected well should there be a strike. They [building workers] were the ones who were on the front lines, now all they’re asking for is health benefits. This is all so upsetting.’

Kauffman is worried about the strike because she doesn’t think her neighbors are up to the task of keeping the building running without help.

‘No one even wanted to give out Halloween candy this year because of COVID, let alone take on another job that involves sitting at a post and making sure people are coming into the building that are supposed to be there or putting out the trash for your neighbors.

‘This strike can’t happen. They have to figure this out,’ Kauffman said.

Ardist Brown, 61, has been a concierge at the building for 34 years. He says only one resident has signed up for lobby duty so far.

He noted that some of them are rich enough to leave and wait the strike out, just like they did with COVID.

‘Some of them are going to leave – just like when the pandemic hit – and ride it out,’ he told the Post. ‘Some of them said they’ll go to their weekend homes and come back when it’s over.’

One resident who lives at a 34-floor high-rise in Midtown East is worried about what the strike could mean for her quality of life.

‘As much as I respect my doormen and want the best for them, I’m a little nervous about a strike,’ she said. ‘It would involve giving up a lot of luxuries and conveniences that we pay for.’

No strike has been announced as of yet, but one building warned its residents to prepare in a letter sent out earlier this month.

‘While the last strike occurred in 1991, together with the real estate industry, we believe it is prudent to plan for the operation of the building if a strike occurs. As in many prior contract expiration years, it is possible that a settlement will not be reached far in advance of the expiration date,’ the letter reads

They were warned that some outside workers, like delivery men and contractors, may not want to provide services to them because it could be seen as ‘crossing the picket line.’

Hoyt & Horn Management has told its Brooklyn residents to prepare for similar sacrifices in case a strike happens.

The company says it will hire a guard to man the front door, but the temporary worker won’t operate the intercom, screen guests or take packages. Residents will also have to take their own trash to the street, since compactor rooms will be closed.

The building workers are paid an average of $55,000 a year under a 2018 contract that sees pay and benefits increase by 3.3 percent a year, Bloomberg reports, though costs in New York City rose by 5.1 percent in February from the year before.

Property managers also say that, under their current deal, workers have up to 49 paid days off for holiday, vacation, sick and medical time, though the breakdown is unclear.

Crystal Ann Johnson, 35, a concierge and doorwoman at the Silver Towers in Manhattan, said, ‘With inflation right now a lot of people live paycheck to paycheck. We are going to get what we deserve.’

The jump marks the biggest 12-month uptick in wholesale prices since they were first tracked in 2010.

Inflation is likely to spike even higher this month, as the impact of soaring fuel prices is taken into account.

The dramatic rise in the cost of living is likely to spell trouble for Biden in November’s midterms, sparking claims the president’s decision to blame Russia is a diversionary tactic.