Skip to content
Home » News » News » New mom, 18, is murdered ‘by her domestic abuser boyfriend, 26’ at her Brooklyn home 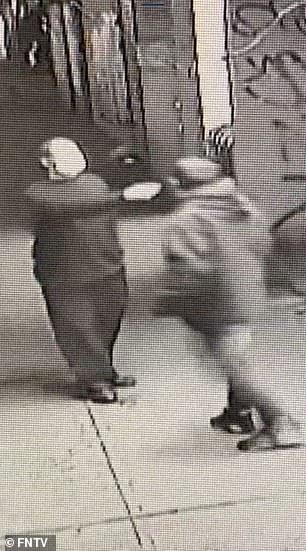 An 18-year-old woman who recently gave birth was allegedly murdered by her 26-year-old ‘domestic abuser’ boyfriend inside her Brooklyn home, police said.

Officers arrested Dylan Diaz on Friday, who was charged with the murder of Damaris Maravilla after police found her dead, lying face up on a bed with trauma to her body inside the house hours earlier.

A neighbor claimed Diaz would often beat Maravilla, the mother of his six-month-old child, with police being called into the domicile at least four times in the past, the New York Daily News reported.

As Maravilla was removed from the home by police, her family was pictured looking on in heartbreak over the young woman’s death. They even rushed the gurney as their loved one’s remains were taken away.

Neighbor Miguel Troche, 58, mourned the death of Maravilla and said he had tried to convince her to leave Diaz.

‘I said if you want to get away from this guy, I’ll help you,’ Troche told NY Daily News about a conversation he had with the young victim. ‘But she said, ‘No, everything’s all right.’

‘I knew he would beat her up, but I never thought it would come to this.’

He described Diaz as someone who was ‘really off his medication’ and said he would often find him pacing back and forth in the streets asking for cigarettes.

Police have not yet revealed how Maravilla was killed and said the investigation was still ongoing.

The young mother’s death is the latest in the crime-ridden Big Apple as violent crime has shot up 41.6 percent so far this year compared to the same time last year.

On Thursday police arrested Giuseppe Canzani, 41, over the brutal murder of Anna Torres, 51, who he allegedly shot point blank in the head in Queens.

Cops said Torres, the mother of an NYPD officer, answered the door at her home at around 2.30 p.m. in Queens’ Ozone Park neighborhood on Wednesday.

They said the suspect fired three shots – two of which hit Torres, with one striking her head. She was pronounced dead at the scene.

At an arraignment on Friday, Cazani claimed he shot the woman because he believed the tarot card reader had put a curse on him.

He is being held without bail after his arraignment last night, and is due back in court on May 26.

Earlier this week on Tuesday, police arrested Edison Cruz, 25, for allegedly shooting dead a 31-year-old victim and injuring two others during the overnight attack on East Burnside Avenue and Grand Concourse in Mount Hope.

Shocking video of the latest Bronx shooting shows the victim wielding a bat at a man said to be Cruz – before running inside a bodega when a gun is pulled out.

Cruz allegedly then opened fire from the sidewalk, hitting the victim in the head and the torso while a man and a woman, both 34, were struck in the arm and chest.

The fatality was declared dead at the scene while the two bystanders were rushed to Saint Barnabas Hospital, where they remain in stable condition

The shooting in the Bronx came two days after a Virginia man visiting family in the Upper West Side was gunned down in broad daylight while sitting in a parked car.

Witnesses allege he and a woman were arguing when a gunman pulled up to the cul-de-sac outside the housing complex.

The shooter pulled out his weapon and opened fire, striking the Virginia father in the head. He then fled the scene, leaving Thomas to die in the Mercedes-Benz GLA 250 he had been seated in.

A resident who heard the gunfire recalled seeing Thomas’ sneakers dangling out of the driver’s side door.