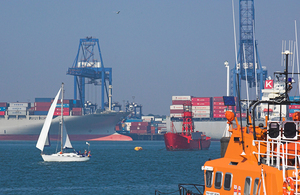 Today, July 6, 2022, the UK government introduced new legislation to ensure that seafarers be paid a minimum of the UK National Minimum Wage.

We are closing a loophole that permitted sailors employed by ships that frequently call at UK ports to receive wages that are less than the UK National Minimum Wage for no other reason than that the ship provides an international service.

The government acted swiftly to start revising the law on seafarer pay protection when P&O Ferries decided to fire 800 dedicated and industrious employees without notice or consultation.

The adjustments will result in better pay for thousands of seafarers who routinely enter the UK, placing the UK ahead of every other EU member state in terms of pay protections.

The Seafarers’ Wages Bill, which was introduced today in the House of Lords, closes a legal loophole that P&O Ferries exploited by allowing port authorities to refuse access to services that frequently call at UK ports but do not pay their workers an equivalent rate to the UK National Minimum Wage (NMWe) for time spent in UK waters.

The exceptional men and women who operate at sea are responsible for Britain’s vibrant maritime past and exciting future.

The new laws we’ve tabled in Parliament today send a clear message to operators that the UK will not permit seafarers to be priced out of their employment by dishonest managers. Fair pay for seafarers is a must.

In May 2022, the government opened a consultation on the Seafarers’ Wages Bill in response to P&O Ferries’ despicable behavior.

Pay protection must continue to be at the forefront of the sector’s goals, according to the response, which was released today along with the presentation of the law.

The government held extensive discussions with the business community about how it could swiftly draft new laws pertaining to seafarer pay protection, and it used the knowledge and viewpoints obtained to draft the bill’s scope and compliance guidelines.

The ports, Maritime and Coastguard Agency, and Department for Transport will all have a role in ensuring compliance.

These new pay requirements will apply to vessels and services that call on UK ports at least every 72 hours on average, or more than 120 times a year.

The Insolvency Service’s criminal and civil inquiry into the facts surrounding P&O Ferries’ layoffs is ongoing.

Someone should not be denied the same protections as UK workers just because they perform their work at sea.

To level the playing field and ensure that everyone working in UK territorial seas will benefit from the equivalency of the National Minimum Wage, we acted quickly to pass this bill.

As we strive to safeguard and advance the rights of all workers, we believe that seafarers will soon see a difference in their wage packets.

We are continuing to work on bilateral agreements with our close neighbors in Europe as part of the Secretary of State for Transport’s nine-point agenda for seafarer protections.

Examining agreements that enhance the welfare and protection of seafarers, as well as the potential creation of bilateral minimum wage corridors, are the main topics of this conversation.

British sailors are among the most highly skilled in the world, and the UK’s Maritime 2050 policy lays out a roadmap for a more equitable maritime economy worldwide.

I am glad to see the government taking action to secure fair pay and improved protections for seafarers who frequently access UK ports after P&O Ferries’ shocking disdain for their dedicated sailors, many of whom had given the company many years of devoted service.

The Seafarers’ Charity applauds The Seafarers’ Wages Bill as a significant step toward acknowledging the significant economic contribution that seafarers make in spite of the fact that their work can be extremely demanding.

The Seafarers’ Charity wholeheartedly supports initiatives to guarantee that all seafarers receive the same compensation and protections as those employed on land.