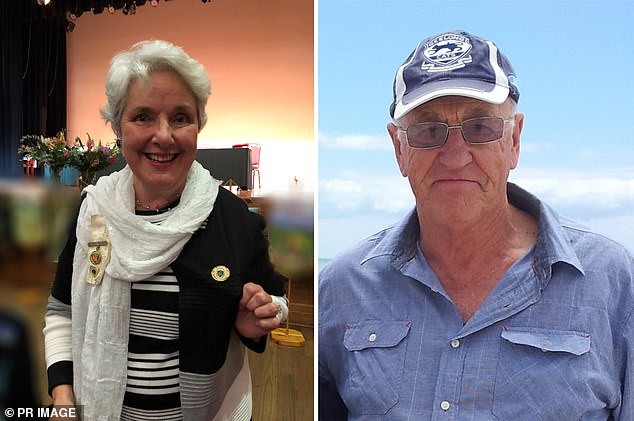 The final hours of Russell Hill and Carol Clay, reportedly killed campers and secret lovers, have been revealed.

The Melbourne Magistrates’ Court was informed on Monday that the elderly couple had visited a graveyard in the secluded bush and buzzed other campers with a drone.

Colleen and Debbie Hill, the daughters of deceased camper Russell Hill, confronted his alleged killer in court on Monday.

Robert Williams, a weed-sprayer, told the court he believed he had spoken with Mr. Hill in the woods days before his alleged murder.

He referred to Mr. Hill as a “grumpy old man” who then buzzed him with a drone.

‘I was being harassed,’ he informed police later.

Mr. Williams reported seeing the drone hovering above the campsites of other individuals, who he felt were being filmed.

Mr. Hill brought a drone on his trip, but it has never been located.

The court heard that deer poachers frequently hunted in the neighborhood, with gunshots frequently audible at night.

The campers were allegedly murdered by Lynn, who then burned and buried their bodies in the woods.

Damir Javor and Goran Miljkovic observed the couple as they parked their vehicle at a campsite believed to be Lynn’s.

Mr. Miljkovic said in court that he saw the pair driving slowly down a woodland road in the Wonnangatta Valley in the Victorian Alps.

“They appeared to be an elderly couple out for a drive,” he stated through a Serbian interpreter.

They were caught behind the old couple as they drove slowly up the trail to their campsite, where two vehicles were already parked.

One of the vehicles was a white Landcruiser, while the other was described as a blue Nissan Patrol – the same sort of vehicle that police recovered when they detained Lynn on November 22, 2017.

Mr. Miljkovic stated that he observed the elderly couple park their vehicle near to the other two vehicles on the site.

Given that there was plenty space for them to park elsewhere, he deemed the decision “odd.”

Mr. Miljkovic testified in court that he spotted the elderly couple again the next day as they returned from a graveyard in the distant wilderness.

The two were returning to their parked pickup truck beside the river.

The burnt remnants of the couple’s tent were discovered by other campers one day following their disappearance.

Ms. Clay went on a romantic camping vacation, and she told her sister about it.

It is suspected that Mr. Hill flew his drone over the area where he was reportedly slain. It was never discovered.

On March 21, that year, the charred remains of Mr. Hill’s Toyota Landcruiser were discovered at their camping along Dry River Creek Track.

Lynn made her court appearance from behind bulletproof glass.

At November 2021, he was apprehended at a secluded camping in Arbuckle Junction, 1.5 hours south of Wonnangatta in the state’s east.

Lynn, dressed in a black suit, took notes during the preliminary hearing, which will determine whether he will face a jury trial before the Supreme Court of Victoria.

The flight attendant wife of Lynn, as well as the families of Mr. Hill and Ms. Clay, viewed the hearing through videolink.

The court heard that prosecutors wished to suppress the contents of Lynn’s initial record of interview and his initial statement to police out of concern that they may not be admissible at trial.

In a late development, Lynn was given a collection of folders containing transcripts of prison phone conversations he had while awaiting trial.

The court heard that CCTV cameras on the Great Alpine Road at Mount Hotham had identified his vehicle.

The hearing is anticipated to last until early the following week.

Monday, Detective Inspector Andrew Stamper’s phone rang in court to the tune of the Queen song “Somebody to Love.”

Footage of the search showed plainclothes officers manually sifting through earth while an excavator worked ahead, flipping over the soil and excavating densely packed ground.

Victorian homicide police collected a 773-page brief of evidence against Lynn, according to a prior hearing.

Lynn has retained the prominent criminal attorney Dermot Dann, QC, to represent him.

He stated, “Mr. Griffiths is an important witness regarding the bullet trajectory, etc.”

The Hill family was unaware that Mr. Hill would be spending the weekend with Ms. Clay.

The court was previously informed that eleven witnesses will be asked to testify during the preliminary hearing.

The police brief comprised mountains of transcripts of secret recordings of Lynn collected by cops as part of “Operation Lexicon,” the court heard.

The 55-year-old guy from Caroline Springs in western Melbourne remains in detention after being accused with murdering the couple.

Twenty months had passed since the suspected victims’ remains were abandoned in dense forest off the Providence Spur Track, north of Dargo in the state’s east.

The gruesome discovery was uncovered by forensic specialists off the Providence Spur Track north of Dargo in the state’s east, in deep woodland frequented by deer hunters.

Greg Lynn is shown with his wife Melanie, a Jetstar flight attendant. The couple met through their respective jobs.

In their search for the missing campers, officers encountered hazardous weather.

Police have been investigating the disappearance of two campers for twenty months.

Detectives suspect the bodies were dumped in the region on March 20, 2020, the day they went missing.

For the time being, it is unknown what else the cops discovered at the gravesite. Lynn faces life in prison if found guilty of the murders.

Mr. Hill communicates through high-frequency radio on March 20, 2020 that he was in Wonnangatta Valley in the Victorian Alps. It is the final time anyone hears from the pair.

* On March 5, 2021, the police issued an appeal for information regarding a “mystery vehicle” described as a “white dual cab ute” spotted in the vicinity.

* Cadaver dogs join the search in Wonnangatta Valley on April 4, 2021

* On April 14, 2021, two shovels were discovered near the Great Alpine Road on Mount Hotham, almost 100 kilometers from where the missing campers were last seen.

* On November 8, 2021, an image of a blue four-wheel drive spotted in the vicinity is released.