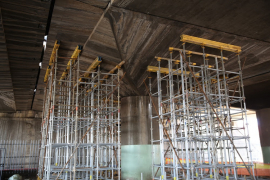 Public Works and Infrastructure, Minister Patricia de Lille, will hand over the latest bridge to the community of Empangeni in KwaZulu-Natal.

De Lille will hand over the Nsimbakazi Bridge on Thursday as part of the ongoing Welisizwe Rural Bridges programme.

The National Department of Public Works and Infrastructure (DPWI) in collaboration with the Department of Defence (DoD) and the KwaZulu-Natal provincial government is constructing bailey-type bridges in the various districts in the province.

The initiative forms part of government’s response to challenges of access to social facilities and forms part of the State of the Nation Address (SONA) commitments as announced by President Cyril Ramaphosa earlier this year.

The programme is aimed at providing urgent safe access to social amenities such as schools, places of work and clinics and further respond to potential disaster areas and emergency disaster situations. The programme contributed towards the skills development initiative as 23 graduates are appointed as the bridge assessment, project management team and maintenance team.

On 21 April 2022, an additional 28 bridge sites requests were received from various municipalities.