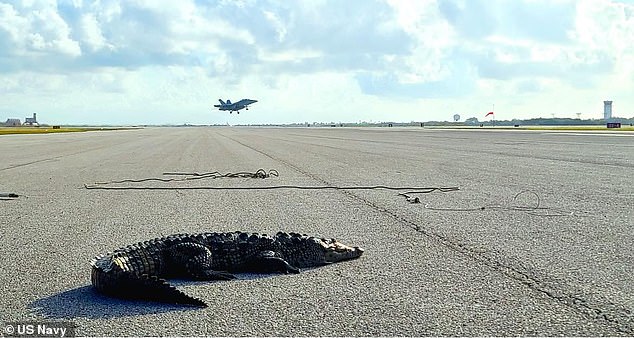 This airfield resident was soaking up some sun on one of our runways recently and didn’t want to budge,’ the Naval Air Station (NSA) wrote on Facebook. ‘Wildlife Biologist Rosa Gonzales had to call in reinforcement from Florida Fish and Wildlife Conservation to move the stubborn American crocodile outside the fence line.’

Military officials at the base, which is mainly used as a training facility for air-to-air combat fighter aircraft, said the apex predator made its appearance on March 10 and was safely held captive before being released in another part of the area.

‘We believe she is a local crocodile,’ said Fish and Wildlife spokesman Jason Rafter. ‘She has been tagged about four years before in that area. She’s got a new tag on her now. That way we can identify her from a distance.’

The chances of encountering a crocodile are not exactly slim at NAS Key West, which is located in a popular breeding area for the species and within the Florida Keys National Marine Sanctuary – about 150 miles south of Miami.

‘We have crocs that live on our airfield and every once in a while they find themselves on the runway,’ NAS spokesperson Danette Baso Silvers told the Miami Herald. ‘Usually they can make them scurry away. But this one was stubborn.’

Other NAS officials claim that there is a littles less than half a dozen of crocodiles lurking in the area.

‘We have six or seven crocodiles on base,’ Wendy Wheatley-Techmer, NAS’s natural resources manager, also told the Miami Herald. ‘Our mission is to fly aircraft and train pilots but we have this co-existing relationship with the crocodiles. We just kind of live with them.’

The last time a crocodile had caused an interruption on the base’s runways was in 2018, when two American crocodiles were also seen sunning themselves on one of the airfield’s strips.Most American crocodiles live primarily in South Florida – the only area in North American where alligators and crocodiles, two species considered as crocodilians, coexist.

Crocodiles were once listed as endangered species due to hunting purposes, but a surge in population over the last 50 years have seen the species grow.

Fewer than 300 American crocodiles were left in 1975 compared to more than 2,000 of them today, according to the Florida Fish and Wildlife Conservation Commission.

‘Sightings of American crocodiles have increased as the result of their recovery along with the growing number of people spending time on or near the waters of south Florida,’ the Commission says on its website.

‘Due to the American crocodile’s shy and reclusive nature, conflicts between them and people are extremely rare in Florida.’

The NAS Key West is also home to 27 other species in the area, according to the commission, including the endangered Lower Keys marsh rabbit.