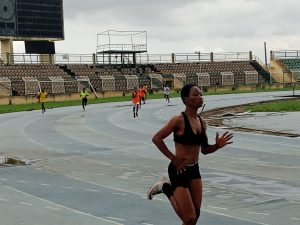 Eighteen athletes (Athletics) will represent Ogun State at the 2021 National Youth Games scheduled to come up in Ilorin, Kwara State between October 10 and 19.

More than two hundred athletes converged on the MKO Abiola Stadium, Abeokuta this Tuesday and were eventually trimmed down to 18.

Under the watchful eye of state coaches and officials of the state’s Athletics Association, the athletes competed for spots at the multi sports event in Long jump, high jump, 100m, 200 metres, and 400 metres sprint events.

A few were also selected to represent Ogun State in Shut Put.

Olympics silver medalist, Chief Mrs. Falilat Ogunkoya who is the chairman of the Ogun State athletics association expressed optimism that the athletes will not disappoint when they get to the youth games.

Similarly, trials were held at the Alake sports center Ijeja, where the Basketball and Kung Fu contingents had their trials, the Taekwondo team also concluded their open trials today.