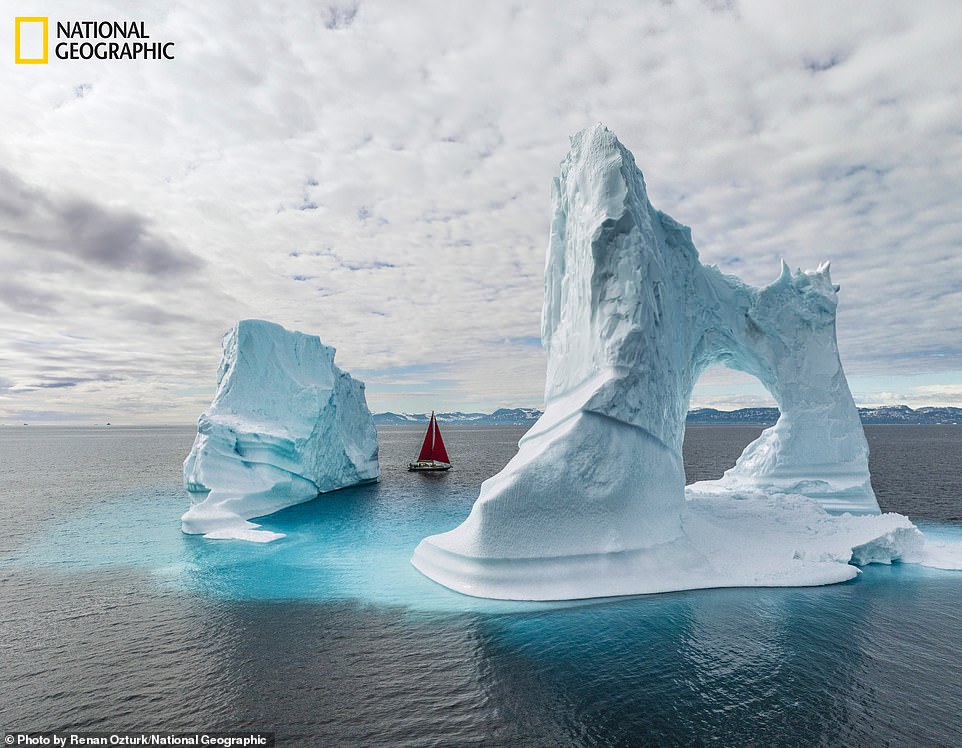 The top “Pictures of the Year” from National Geographic have been revealed, highlighting the most beautiful photos from all across the globe that were taken in 2022.

One arresting picture shows enormous, light blue icebergs sticking out of the ocean, while another shows molten rock being sprayed during one of the Canary Islands’ most damaging volcanic eruptions in the last 500 years.

Incredible drone footage of fewer caribou dashing across the Arctic illustrates how climate change is affecting endangered wildlife, while another picture depicts the first ascent of Mount Everest by an all-black crew of explorers.

Images of Ukrainian migrants standing together in solidarity and a Spanish military emergency expert carefully walking over hot rock while collecting lava from a recent volcanic eruption are just two examples of the many pictures that honor mankind.

Images that “stop us in our tracks” and inspire us to see the world around us in novel and unexpected ways are those that were chosen,

The top 118 images for the third edition of National Geographic’s Pictures of the Year were chosen from more than two million images the magazine’s famous photographers shot across the world.

You may see every image from National Geographic’s PICTURES OF THE YEAR 2022 collection online.

The PICTURES OF THE YEAR photographs, according to Latorre, “stop us in our tracks and make us pay attention to tales that need to be shared.”

“The magic of visual storytelling is that each photograph provides a portrait of life in action, inspiring us all to explore the world around us in new and unique ways.”

According to the NatGeo news release, PICTURES OF THE YEAR 2022 has several tales that take readers to distant and nearby areas.

2,238,899 photographs were submitted, 132 photographers were out on assignments, and 4,000 pounds of equipment was sent out into the field this year.

Photographers braved harsh conditions in search of the ideal photo, from days hitting 49 degrees below zero in Canada’s Northwest Territories to 120-degree heat in Pakistan’s Sindh and Balochistan districts.

As a consequence of the approach, practically every continent was covered, providing a rich and varied view of life throughout the world.

Nathan Lump, editor-in-chief of National Geographic, said, “I love that Nat Geo’s PICTURES OF THE YEAR 2022 isn’t just documenting the news highlights of the year; we’re displaying the dramatic tales of the year that our photographers throughout the world have had their lens on.”

Because of this, the collection, in my opinion, conveys originality and surprise in a manner that best represents what Nat Geo does.