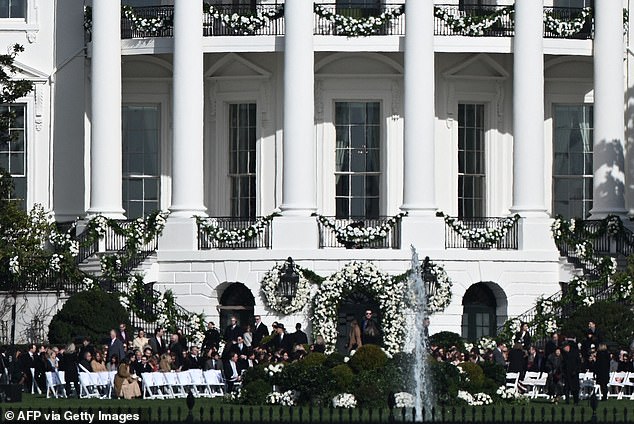 On a beautiful but chilly Saturday morning in Washington, D.C., the South Lawn of the White House was full with guests as Naomi Biden prepared to marry Peter Neal.

The grass was lined with chairs, but no tent was erected over the outdoor site. The temperature in D.C. was 37 degrees, but it was bright and windless.

Guests waited in line early to be seated for the 11 a.m. ceremony. As they entered the White House grounds for the wedding, the staff checking them in provided hand warmers.

To enter, guests have to pass a covid test and undergo a screening procedure.

Former Senator Chris Dodd and Michael Cohen’s daughter Samantha Blake Cohen, who attended the University of Pennsylvania with Naomi Biden, were among the many attendees seen entering the event.

The White House was adorned with white floral wreaths, and security was tight. The two public parks on each side of the White House – Lafayette Park and the National Ellipse – were closed to the public. Outside, there was a considerable police presence.

The White House holds hundreds of social events each year, but a wedding is unparalleled.

A source involved with the planning informed DailyMail.com that Saturday’s event will consist of three parts: the 11 a.m. ceremony on the South Lawn, followed by a special lunch for relatives and the wedding party at the White House, and an evening of dessert and dancing at the White House.

Other than the fact that the Biden family would pay for the wedding, the White House has provided few specifics regarding the nuptials.

The days preceding up to Saturday were filled with the usual assortment of festivities and last-minute preparations, including the purchase of wedding attire and the acquisition of a marriage certificate.

On Thursday and Friday, workers marked the aisle down which the bride will walk to meet the groom on the South Lawn. Blue plastic on the floor indicated that the bride will leave the diplomatic room and meet Peter. Flower garlands were strung for her to stroll through.

On the South Lawn, row after row of chairs were arranged.

And multiple Ryder trucks unloaded deliveries in the driveway.

Even though the wedding is being conducted on government property, the Biden administration has stated that Peter and Naomi desire a ‘private’ ceremony, hence press coverage will be prohibited.

“Naomi and Peter have requested that their wedding be private, and we are honoring their request,” said press secretary Karine Jean-Pierre at Friday’s news briefing.

Naomi Biden, age 28, is the oldest grandchild of the president and the first of her generation to wed. However, when other members of the president’s family, such as Tricia Nixon and Lynda Bird Johnson, had weddings at the White House, they were open to the media, including photo and video coverage.

But Jean-Pierre underlined the young couple’s desire for a ‘private’ affair, despite Naomi Biden’s decision to have her wedding on the White House South Lawn.

They want it to be private, and we will honor their request. After the wedding, we will release a photo and a message from the President and First Lady. Again, these are their desires, and we will respect them,’ she added.

The logistics of a wedding can be difficult for any bride, but a White House wedding is further complicated by Secret Service background checks on guests, security inspections before they enter, and questioning from the White House press corps.

Meanwhile, Naomi Biden’s younger sisters Maisy and Finnegan attended a rehearsal dinner with the bride and groom and the rest of the family on Friday evening before to the wedding on Saturday.

Finnegan, 22, donned a black dress with sequins, and Maisy, 21, wore an orange cardigan over a patterned outfit as they left their mother Kathleen Buhle’s home for the Renwick Gallery, which Peter Neal’s family had rented for the evening.

On the same block of Pennsylvania Avenue as the White House lies the Renwick Gallery. Even though it was only a few steps away, Joe and Jill Biden took a motorcade to attend the event. The museum highlights contemporary ornamental arts and craft.

The event was hosted by Peter Neal’s parents, Drs. Mary and William Neal, according to the White House.

The Biden household has been occupied with preparations for Saturday.

Thursday, Maisy Biden received delivery of her garment at the home of her mother, Kathleen Buhle. She even left a message pleading with the delivery drivers: “My sister is getting married on Saturday. My gown is within this box. Please leave deliveries.

She was observed taking up a box with a broad grin, indicating that the communication was successful.

Naomi Biden is the oldest grandchild of the president and is close to the first couple. She is the 2017-divorced daughter of Hunter Biden and Kathleen Buhle.

In addition, she is available to address any pre-wedding queries.

She and her 25-year-old fiance Peter Neal are reportedly residing in the White House. Neal, who worked in Democratic politics, recently graduated from law school and works at Georgetown Law, while she works as a lawyer in Washington, D.C.

Friends introduced them four years ago, and they got engaged during a trip to Neal’s homeland of Jackson Hole, Wyoming, in September of last year.

Bryan Rafanelli, who designed Chelsea Clinton’s wedding and countless state dinners for President Barack Obama, will oversee their big day. In addition, he is a major donor to Democratic candidates.

However, the price can be steep. Wedding websites indicate that a Rafanelli wedding costs between $250,000 and $1,000,000 dollars.

And a wedding at the White House presents unique problems. Every person visiting the grounds is required to provide their Social Security number and date of birth in order to conduct a background check. At the entrance to the grounds, magnetometers and x-ray scans for luggage are installed.

In addition, the White House normally needs a negative covid test for those who are in close proximity to the president.

However, Rafanelli has extensive experience with this type of treatment.

He stated of Chelsea Clinton’s wedding in 2010: ‘We had to coordinate with the Secret Service for the president and then-Secretary of State Hillary Clinton’s diplomatic security, in addition to our own security firm. It seemed like a military operation with all of this protection, but we wanted to be respectful of the village where it was held.’

And, he told Business Insider, he was pleased that the incident remained confidential.

‘I’m rather pleased that there are just six shots of Chelsea and Mark’s wedding to date, and that these were the only ones shared by the couple themselves. Everything else was private, and all attendees will recall what transpired,’ he claimed.

But the real difficulty may lie in keeping it off social media.

The particular characteristics of the South Lawn, the Rose Garden, and the South Portico make this location suitable for Instagram.

However, Rafanelli observed that guests often obey the couple’s request not to post on social media.

‘What’s fascinating now is that, in general, guests are quite adept at avoiding snapping photographs when asked not to. Occasionally, we must confiscate all phones from guests and employees in order to secure the wedding and ensure that everyone is there, but in general, wedding guests are respectful,’ he said.

On Sunday, President Joe Biden will turn 80 years old, and his entire family will already be in town for his wedding.

The president will then traditionally pardon the Thanksgiving turkey on Monday. Jill Biden will welcome the White House Christmas tree, which will arrive from a Pennsylvania farm that afternoon. In the evening, the pair will fly to Marine Corps Air Station Cherry Point in North Carolina for a Thanksgiving celebration with the military.

The Biden family will next travel to Nantucket for their customary Thanksgiving break, where they are likely to discuss the president’s 2024 reelection bid.

On December 1, upon their return to Washington, D.C., the first couple will hold their first state dinner, welcome French President Emmanuel Macron.

The holiday season then begins in earnest.

The White House has resumed its holiday gatherings.

In addition, the Kennedy Center Honors will be recorded on December 4, with George Clooney and U2 among the recipients.

First, however, is the wedding.

The wedding on Saturday is the nineteenth known to have been place at the White House and the first on the South Lawn.

Tricia Nixon’s wedding to Ed Cox in the Rose Garden on June 12, 1971 was one of the most renowned White House weddings.

President Richard Nixon, her father, escorted her down the aisle.

There is also a lengthy tradition of presidential offspring getting married or hosting receptions at the White House.

During the time of Chelsea’s wedding, her father was not president. George W. Bush hosted a celebration for his daughter Jenna at the White House, despite the fact that her wedding took place in their home state of Texas.