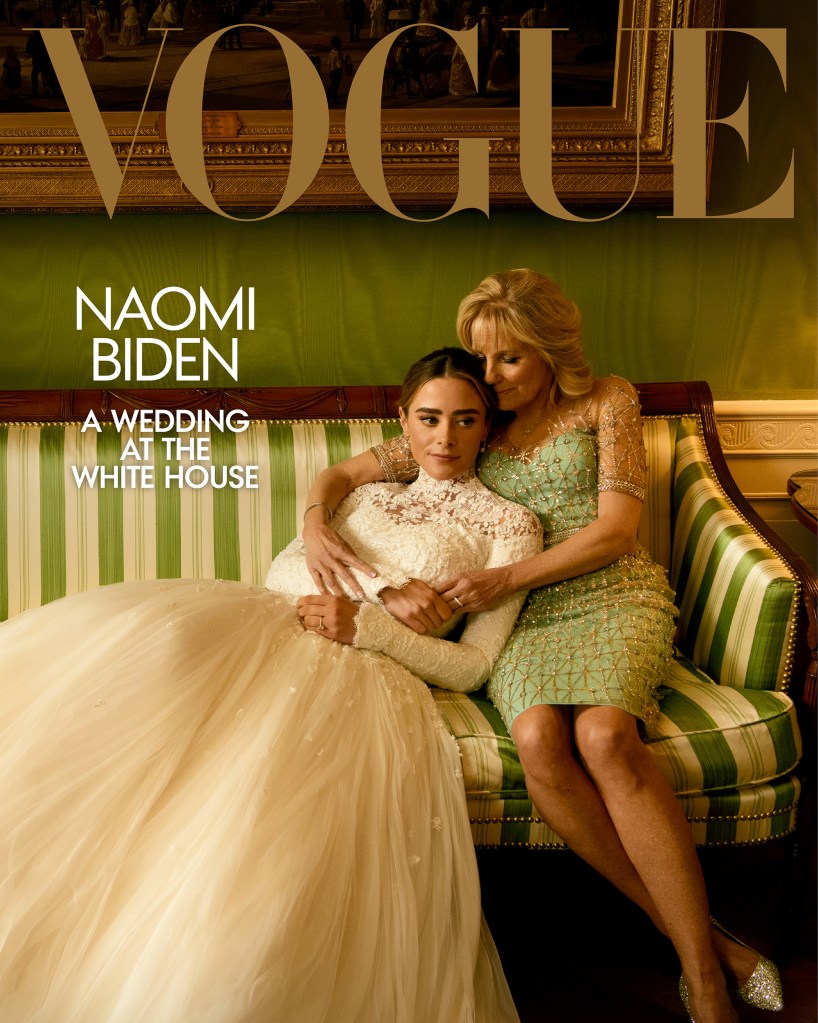 As a result, the media were not invited.

First lady Jill Biden and first granddaughter Naomi Biden are featured in the current edition of Vogue, replete with a gushing interview and photograph, only days after excluding the press from Naomi’s White House wedding.

On Saturday, the eldest granddaughter of President Biden, age 28, whose father is the scandal-plagued first son Hunter Biden, wed her now-husband, Peter Neal, age 25, in front of 250 relatives and friends on the South Lawn.

After media were barred from covering the extravagant wedding, Vogue released an exclusive story on Tuesday, along with a plethora of stunning images of Jill and Naomi shot before to the wedding.

“Because our families are so close, we always knew we would get married in someone’s garden. Naomi told the magazine, “I believe if my father were not president, it would be their home in Wilmington or Peter’s family’s property in Jackson, Wyoming.”

“There’s simply so much beauty and history in this location, and we really wanted to pay tribute to that,” she said of the White House.

After her wedding in the White House over the weekend, the first lady Jill Biden and her eldest granddaughter Naomi were featured in Vogue on Tuesday.
Norman Denise Roy

The glowing article was released days after White House press secretary Karine Jean-Pierre notified reporters that coverage of the ceremony and evening event would be prohibited, much to the dismay of the packed media pack.

“Naomi and Peter [Neal] have requested that their wedding remain private, and we will honor their request,” Jean-Pierre told reporters on Friday.

This is their want, and we should be ecstatic and pleased for them as they take this very monumental step in their life.

Kristen Welker of NBC News objected vehemently, arguing to Jean-Pierre, “Looking at all of this video and images that we have of Tricia Nixon’s wedding, Alice Roosevelt Longworth’s wedding, and [first daughter Lynda Bird Johnson’s] wedding, and the historic record that now exists because the press was allowed in and able to catch a glimpse of it, why not just let the press in for a few minutes to have access?”

Welker continued, “This wedding is taking place at the people’s house, not at a private residence.”

“I completely get that. It is occurring at the people’s residence. It is a lovely moment. “This is a happy time,” Jean-Pierre responded. “It is a family affair, really. And we will honor Naomi’s and Peter’s requests.”

Naomi told Vogue of the wedding’s security issues, “It’s difficult to ask guests for their social security number along with their RSVP.”

On Saturday, Naomi Biden, age 28, married Peter Neal, age 25, in front of 250 relatives and friends on the South Lawn.

Elsewhere in the puff piece, Naomi disclosed her strong relationship with the first lady, affectionately known to her grandkids as “nana,” and described how Jill had been “very active” in the wedding’s planning.

“I do know she lost sleep over the fact that I planned to serve turkey sandwiches at the lunch,” Naomi recalled, adding that the menu was adjusted to include Hunter’s favorite dish, chicken pot pie.

Jill Biden said, “Naomi has a strong sense of self and has a vision for her wedding.” It was amusing to observe her delight in the smallest of things.

Naomi said that her grandma had advised her to maintain perspective during the planning phases.

Naomi stated, “She has emphasized to me that every time I am nervous about wedding details, I should take a deep breath and realize that the day is about Peter and me being surrounded by our loved ones.”

“She has taught me so much about independence and autonomy. However, this does not preclude you from being a selfless and deeply dedicated spouse.”

The 1,800-word story had just brief mentions of Naomi’s parents, Hunter and his ex-wife Kathleen Buhle.

Naomi disclosed her tight relationship with the first lady, affectionately known to her grandkids as “nana,” as well as Jill’s “extreme involvement” in wedding plans.
Norman Denise Roy

The article also described how the newlyweds had a luncheon in the State Dining Room with white and gold presidential china following the ceremony, as well as a black-tie celebration later that evening.

Naomi wore a Chantilly lace Ralph Lauren gown for the daytime ceremony and a silk Mikado Reem Acra gown for the evening celebrations.

Still, the most of the piece was devoted to her connection with her grandparents, including the fact that Naomi and her now-husband had moved into an apartment on the third floor of the White House in the months preceding the wedding.

Naomi stated, “I try to remember that it’s the White House, but after time it becomes ordinary.”

She said that she had spent the most of her life within one mile of her grandparents.

Naomi stated, “The connection has not altered significantly.” “When I was in middle school, we lived so close together that they attended every athletic event and school play. We still perform the same actions. This has always been the case.”

The wedding spread of Naomi was published online on Tuesday, but it will be featured in the January/February 2023 edition of Vogue.

Jenna Bush Hager, daughter of President George W. Bush, also hosted a reception in the White House in 2008, one month after getting married in Texas.

Naomi is the first presidential grandchild to ever get married at the White House. It was unclear whether she received compensation for the exclusivity.

The wedding spread of Naomi was published online on Tuesday, but it will be featured in the January/February 2023 edition of Vogue.